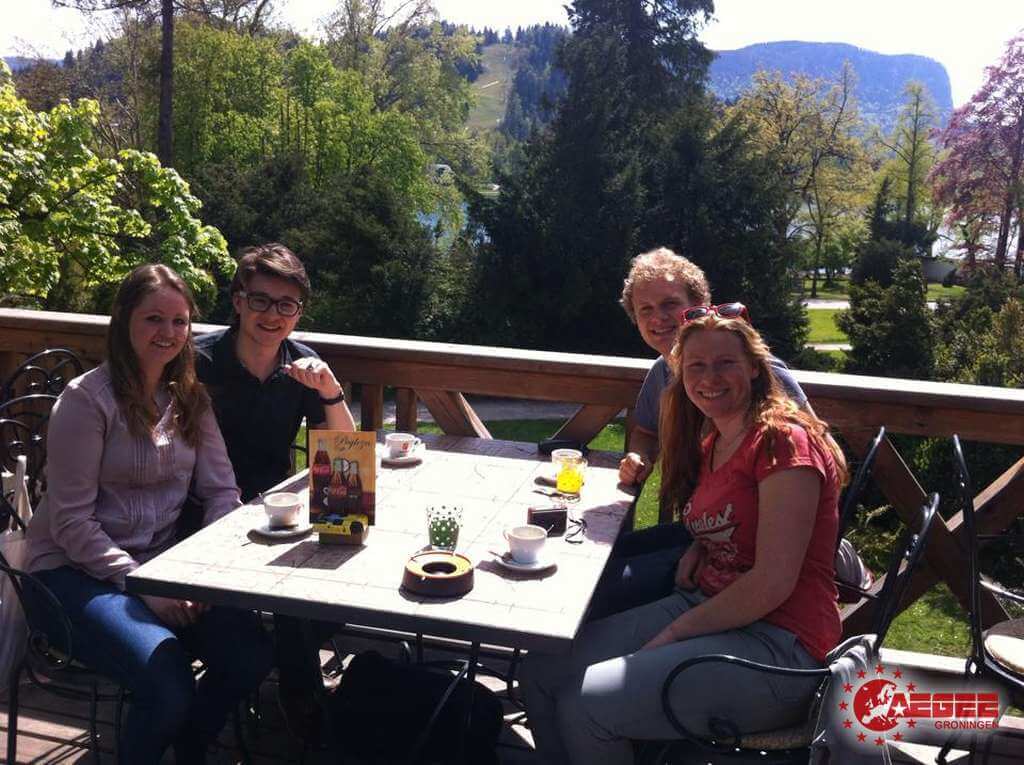 When you are hitchhiking and you think: ‘What the hell am I doing at this gas station?!’ (you are still lucky you are at a gas station though), than you should recall that you are actually heading somewhere else (practical tip: look at the information about Ljubljana in the competition program). Happily we didn’t have many of those moments, only once, but we will get to that. Maybe I should speak for myself. My partner Ruben probably had far more of those moments with me as ‘critical’ partner in crime.

I am not a great story teller, so imagine the bragging yourself and you will see it was great. All this greatness started at 07:00 on Thursday the 17th of April in Wijchen, at Jorrit’s parents’ place; my alarm clock rang. The shower was already occupied, twice. Ruben was hung over at breakfast. Unfortunately he wasn’t while singing in the car, on our way to the very first gas station. We drove and arrived together with Jorrit and Charlotte. We almost felt guilty that we got the first ride, but after we were in the car there was no space left for Jorrit and Charlotte anyway…

The lady of our first ride had been a hairdresser and now she worked for a big hairdresser company to help improve the quality of the different stores. Her own haircut was nice as well: blond, short and ‘rounded’. No less important, she was nice company and drove us to the next gas station, where it apparently would be easier to get a ride in the right direction. I don’t know if it was easier, but it wasn’t easy. People still went in the wrong direction. But saying it wasn’t easy is almost like saying we had a hard time, which was not yet the case.

We got a ride from a proud and happy father, who enjoyed skiing with his family and working for a tire company. It was nice talking to him as well, he even changed his route so we could be dropped off at a better place. I think it was here where we immediately got a ride, after getting out of the other car. The ride was offered by a German business woman. We had to make a quick decision, she really needed to go and still had to make some phone calls. I had a hard time in her car: I found the conversation so hilarious that giggling seemed the only appropriate response. It wasn’t. She worked at an international company doing ‘something’, now she was calling a British colleague gossiping about everything there was to gossip about regarding another colleague. It took the whole ride from Heerlen to Cologne.

We arrived at the next gas station, off the highway! We were worried we’d maybe made a mistake taking the ride, everyone went into the city. But we were lucky when we convinced a Swiss Architect to take us with her. She said there wouldn’t be enough space, she was almost right. It seemed to me she was more concerned with design than functionality when it came to cars. Her husband did agriculture as a hobby. Crooked we managed to fit in the car. Being crooked is still better than not being crooked when it comes to hitchhiking( I know all about it).

Between Cologne and Salzburg it went fluently. With one artistic electrician saying properly that he wasn’t so good in English, one sunglass wearing guy in a cabrio BMW, sports edition (I’m starting to learn), traveling for business to South-East Asia from time to time, and a Slovakian driving home this night in (only) 12 hours and preferring IJmuiden above Amsterdam. I have to add that I was happy that it was just around eleven when driving with the Slovakian guy, past four o’clock he wouldn’t be able to tell which of the three he saw was the car in front of him. 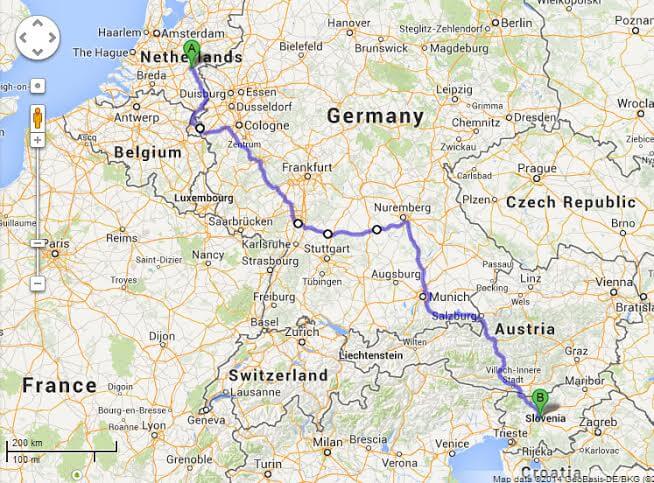 We arrived in Salzburg, that is to say at a gas station near Salzburg, when it was around half past eleven in the evening. We looked on the map and did some planning for a change. Ljubljana was apparently 150 kilometres away, so we decided not to go into Salzburg. We spent an hour waiting for a ride, while we were gradually freezing to death, but it seemed like three to me since we only met people with full cars and who were going in the wrong direction. Anne-Fleur and Anton arrived; we got away. It was a short and silent drive, we didn’t speak any language he spoke. At the next gas station our motivation was in alignment with the temperature, it seemed to be below zero. We looked for information about Ljubljana in the program booklet, it didn’t work. By then it was one o’clock and it was getting even colder.

He was wearing a white shirt and just stood there, even staring a little, while filling his car with petrol. We walked over there, I had a good feeling about it. His effect on us was even better than the program booklet. He had just visited Ljubljana with a friend. If it had been a somewhat fancier city there wives would have joined. Ljubljana is amazing he told us and he explained all about the pubs, the city centre, the pubs, the prices of the pubs and the pubs. He was really enthusiastic about the city, and that’s just what we needed. Getting to Ljubljana in one ‘day’ seemed easy again.

Ruben had been all about the licence plates, especially in Germany, now he spotted a LJ. The guy driving this heavenly licence plate seemed normal, but later on we found out he wasn’t. Sitting in the car the ‘real’ conversation started: ‘Are you serious?’ ‘yeah, yeah, of course’, was our overeagerly response. Do you know where I am talking about? … I mean ’, he lights up a cigarette, takes a puff, looks out of the window, ‘about life’. Silence (again).

Ruben would later describe him as intense, I agree with him (on that). Listening to the man and agreeing with him, there was no other option (I tried but I appeared to not understand him, according to him), talking about god, (his)life, the universe and everything. Ruben sat in the front seat, he still hates me for wanting to sit in the back. Especially because we forgot about Austria, it was just between the two maps.

The dog of our host was grumpy, our host was all but grumpy while getting us at half past four from the train station. We both were a bit hung over (and this intense guy wouldn’t leave us till she arrived). So our thanks for this happy end go to Sara (and her dog), our saviour.