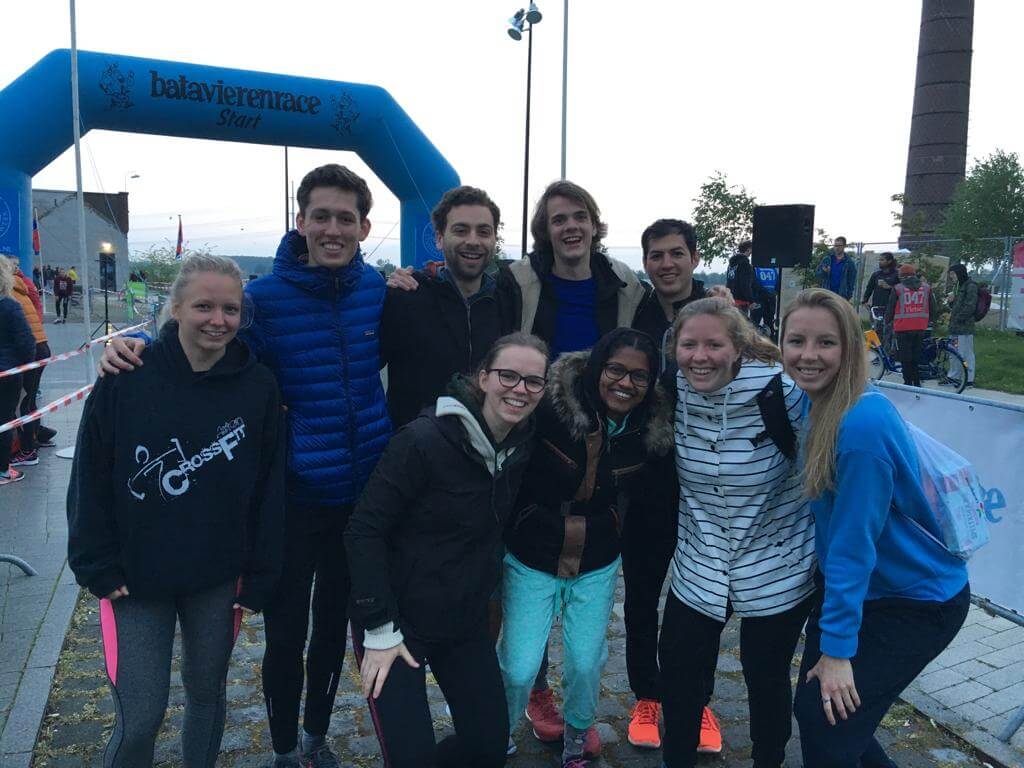 The Batavierenrace, one of the most fascinating running events which I’ve ever seen. I had a goal when I signed up for this race: I would like to run 10,5 kilometres below 45 minutes. This was doable since I sometimes ran 5 kilometres in 20 minutes. However, I did not know If I had the capacity to run it within that time span. Just like almost every AEGEEan, I began too late with training for this race . I ran three times a week and started at first with 5 kilometres. After a while, I increased my training distance till 7,5 and lastly 10 kilometres. When I did that for three weeks, I realised that my goal could  be translated into practice.

The Batavierenrace is divided into three groups: a night, morning and afternoon group. Each group is running a certain amount of kilometres, which is determined by the organisation. The group, which was running during the night, started in Nijmegen and the rest of the groups went directly to Enschede in order to take some rest for the next day. When we arrived in the evening in Enschede, we got one of the most delicious pasta pesto which I’ve ever tasted: there was pasta and pesto but you could not taste the pesto and the vegetables were scarce. The shower facilities were nice and the dormitory was very big. Because of the fact that there were  quite a lot of people chilling, it was not possible to sleep. That’s why I was walking around the camping area with Zenthe and we watched a very awesome game, which I also would like to do once: There are two teams and each team has 4 players. There is a big bottle of water in the middle of the playing field and the players need to throw the bottle down. When the bottle is thrown down by team A, team A needs to drink their beers as fast as possible down. Team B can prevent Team A from drinking the beers down by means of putting the bottle of water on the right place and afterwards running back to their side of the field.  This really characterized a group atmosphere, which I also experienced during the race.

I did not sleep a lot since we needed to wake up at 15 minutes past three. This was too early according to me as we were waiting 1,5 hours at the place, where the second group started to run. I downloaded a running app in order to know how many kilometres I still need to cover and whether or not I was  running fast enough to achieve my goal. Unfortunately, the app did not work well since it did not mention the right amount of kilometres, which I needed to run. I did not know that during the race, so I fully trusted the app. Consequently, I started to run slower so that I have some energy left for the last kilometres. It was not possible to have a final sprint though. Although I achieved my goal, I realized that I could have ran the distance  faster. When I reached the finish, I needed to cycle and my partner started to run. This switch could be made much faster and I experienced this with a lot of groups. In addition, when my partner ran her distance, the car was not on the right place and this happened two times. As a result of that, the next person was not able to run and we needed to wait for a long time. When these issues will be taken into account next time, we will have a higher ranking for sure. The race was fascinating, especially at the place where people need to switch sides. Everybody was supporting their team and only for one goal: running as fast as possible. When our group did a good job, we had some time to take some rest. We really did that as we did not sleep a lot. We woke up on time so that we could watch the final stage in which Rosan and Neepan were running. Almost all the people were watching the last 400 metres in the stadium. I really enjoyed it in combination with some beers and nice weather. The final stage was very funny since a  team could win a price when they have the most awesome accessory. There was a team, which lifted a tree trunk and another a tent. After experiencing this, I realized that I would like to run the final stage next year! Also because of the fact that a lot of people are supporting you.

We had  a delicious barbecue after the final stage, which was organized by AEGEE-Enschede. There were beers and fresh meat provided. In other words, it was a good barbecue in which we could talk about our experiences during the race. There was  also an awesome party after the barbecue, which was a good ending of this event.

To conclude, the Batavierenrace was according to me an event, which I will always stay with me  as a  dynamic, cosy, well-organised and in which there is a great team spirit.