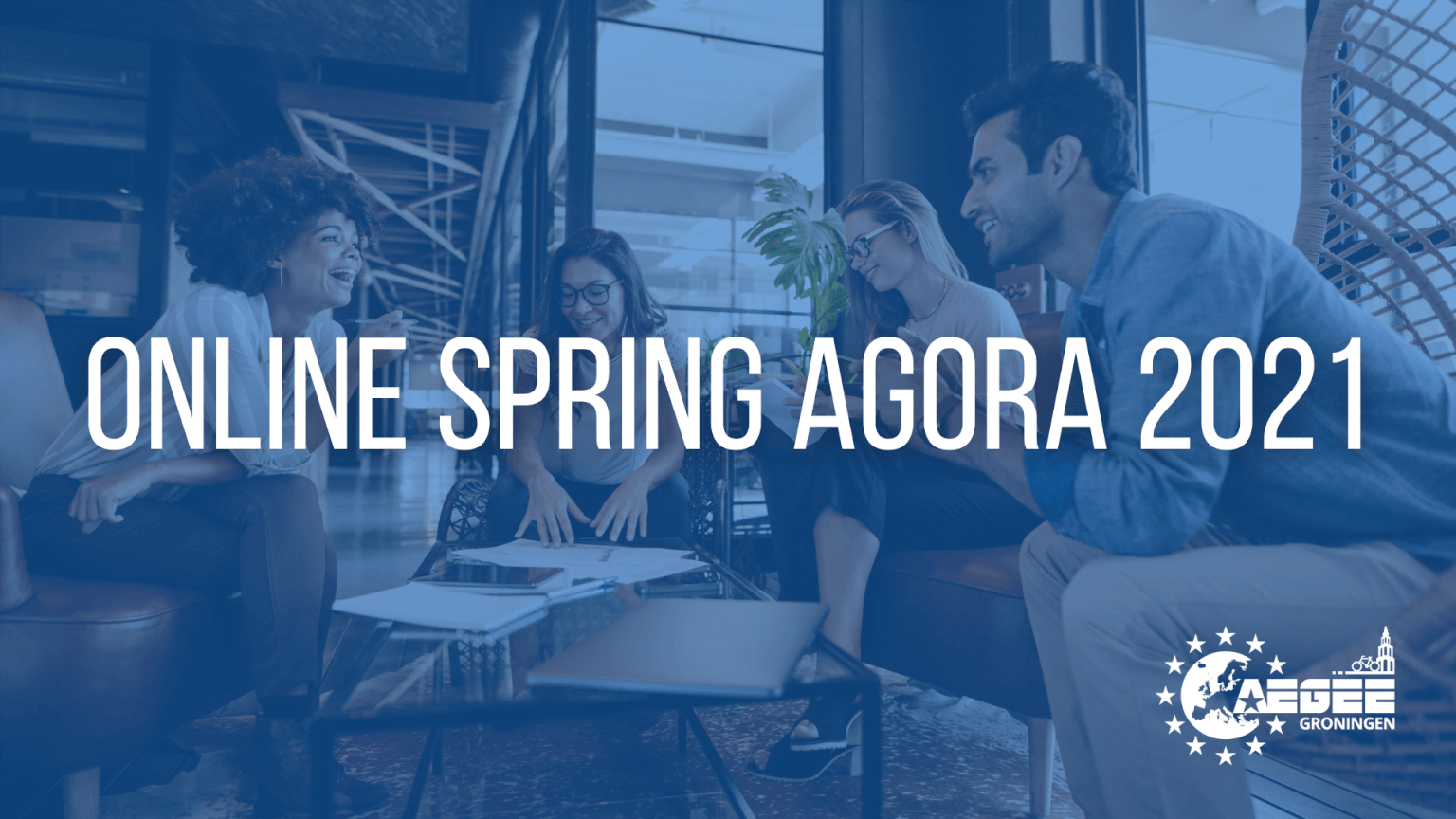 From 25th – 30th May AEGEEans have gathered online to discuss highly important matters for the future of the organization. Nevertheless, things were different than in previous online Agorae. This time the delegates and all other involved members gathered on zoom, and everyone else could access the stream not via discord (like it used to be done in the past) but via a professional stream on the MyAEGEE website. Another significant difference was the set-up of the Agora. This time the sessions happened in the late afternoon/ evening hours on weekdays, the whole Saturday and a few hours on Sunday. Do you want to know what exactly happened during this online event? Then keep on reading!

The first day always marks the opening of the Agora, and this means that every local has the opportunity to sing, dance and other to present itself. Surprisingly, there was no audiovisual fun this time (just audio), since cameras were not on for the roll call. After dinner time AEGEEans could meet & greet each other on the discord server. It was a great to get to know the people in the network.

Wednesday – What a day

The second day started with a seminar on EU careers, a very interesting topic for many AEGEEans. Afterwards, there were two sets of parallel slots in which the focus was on various things, ranging from presenting Activity Reports to reviewing articles in the CIA and implementing changes. That is when the proposal of abolishing Post Agora Voting was presented and later on accepted. Post Agora Voting has not been effective in the past therefore this change will increase the efficiency of the Agora. In the evening the Comité Directeur prepared a trivia quiz for all AEGEEans!

This was one of the most exciting moments of the Spring Agora. It was the moment in which the upcoming CD members have presented themselves and the network could ask questions about their motivation and plans for their CD year. This moment establishes a new chapter for AEGEE with a lot of very enthusiastic AEGEEans involved! Among other, there was a Progress Meeting held about sustainability within AEGEE. It is an important topic, so how can we make sure that the set goals are achieved, and that there is constant and consistent improvement in our actions? By brainstorming how we want sustainability within AEGEE to look like next year, in five or ten years, we can stay focused on and aware of the improvements that are still to be made.

The social program had an aspect of traveling, but how is that possible during the pandemic? It’s all possible with digital resources! Members of AEGEE-Moskva streamed live a tour around Moscow. This was the perfect opportunity to learn more about the city and see it from a local perspective, without even having to leave the house!

Friday – Free time? Not yet!

On Friday, the elections have continued and this time the focus was on the Commissions of AEGEE-Europe. All candidates presented themselves and were asked questions. Later on, there was one parallel slot in which among other financial reforms, position paper and post-Agora voting was discussed. Besides that, there was a workshop given by AEGEE-Academy with the title “Awaken the Talent Manager Within You”. This session focused on what is talent, how can it be used within AEGEE, and how to direct people and their talents in the right direction. The evening program brought attention to sustainability. AEGEEans watched together “Seaspiracy” – a movie that focuses on fish industry and blue economy.

The fifth day of the Agora had the longest agenda, the sessions were planned from 9am – 8pm. This might seem a little bit daunting, but it was actually one of the coolest Agora days! Why is that? Because there was an Agora Watch Party organized in Groningen. We gathered at the Humanistisch Verbond to watch the Agora together and share the AEGEE spirit.

The morning plenary consisted of presentation of AEGEE projects and partnerships. In fact, two of our members are involved with two of the presented projects! Later on, financial documents were presented, and more Activity Reports were shown. Then it was time for the Network Status Update, during which the Network Director presents locals to be upgraded or downgraded, and the Network Commissioners give their advice after which the voting takes place. In another parallel slot, amusing workshops were given such as “Europe: 404 – Borders not found”. It was a workshop delivered by the project members of Where Does Europe End 2.0, a project focused on examining and envisioning the future European identity, as well as empowering young people to be active in European society. In the evening plenary the candidates for coordinators of working groups, and the three topic options for the EPM were presented. The EPM topic was voted on via ranked voting and the winning topic is “Strengthening Democracy”. The long day finished off with a PubQuiz!

The last day of the Spring Agora 2021 was very short. The morning parallel slot had a Progress Meeting and a Workshop scheduled. In the Progress Meeting, the various types of trainings within AEGEE were explained and the different opportunities that they provide were shown. After lunch it was time for the closing plenary, a bittersweet moment. A lot of happy news were shared, many locals were upgraded, Convention d’Adhésion – time to sign and sing, presentation of Autumn Agora Moscow 2021, presentation of AEGEE-Novi Sad – the host local of Spring Agora 2022, and presentation of the voting results.

It was a long Agora, and the network has lived up to the challenge to once again connect virtually and discuss the important matters for AEGEE. This long journey was well concluded by the closing words of Diederik – president of AEGEE-Europe. The Agora has been officially closed as we were wished all the best, because we deserve nothing less.

If you want to know more about the voting results and voting behavior of AEGEE-Groningen, take a look at the European Newsflash. For more information about upcoming European events contact the European Affairs Director!