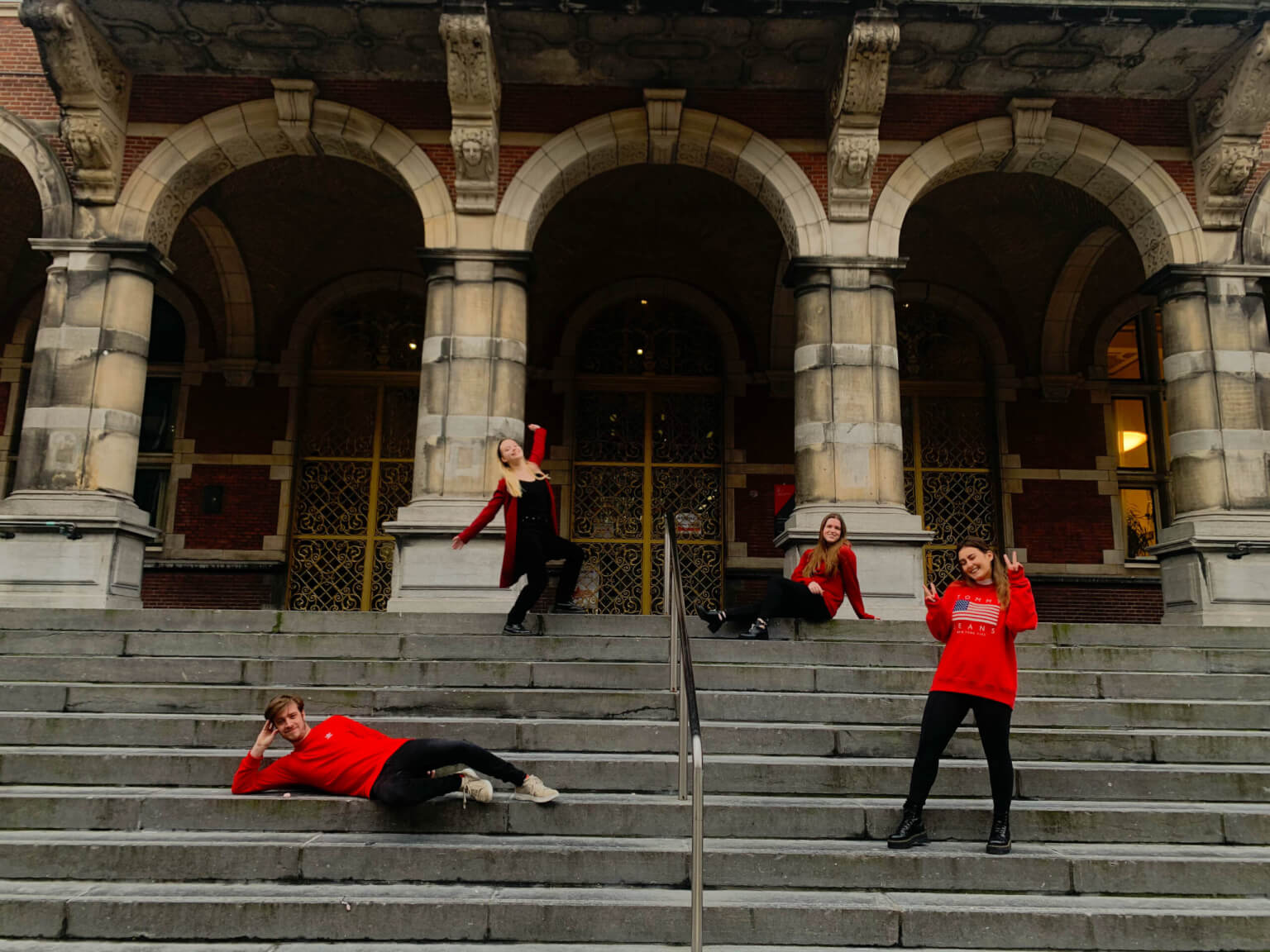 Hello dear readers, welcome to the little introduction of this year’s PR-Cie!

We are the four crazy zebras that are responsible for this year’s wonderful merch, cheers to that! We promise that this year’s hoodies will be cozy on the inside. Even though it says “a monkey with a golden ring is still an ugly thing”, our hoodies most definitely will not be. The clock is ticking this year, but unfortunately not for us, as we only had the chance to get physically drunk together three times. But we will make up for that later when corona allows us to.

We will now introduce the four rascals that make up this committee:

There is our chairwoman (usually sits on one of these Ikea coloured kids chairs, or on the floor when really wasted), Pia. She loves to make everyone happy with a bratwurst, gluhwein, or tea (true to her nickname (Tea)-ia). This leads to evenings where we either talk about sad topics non-stop or end up really drunk. Usually, it may be dangerous to have a German in the lead, but she’s actually doing well. Even though her lungs are pitch black, her heart is made of pure gold.

Talking about national stereotypes, guess who’s in charge of money; it’s actually someone that is sometimes considered to come from Belgium. But he’ll proudly tell you that Limburg is still a part of the Netherlands and that it’s friet, not patat. As a Dutchie, you would think that he is rather tall, which is not the case, but he is still a man of big ideas. His biggest passion this year will be the firefighter calendar, as he is dreaming of half-naked guys dressed in uniform 24/7! Applications are still open, so if your Body Mass Index is above 0, don’t hesitate and sign up! Who doesn’t want to look at Bonno while sitting on the toilet? Additionally, he had some of the best months of his life in Finland, where he thought he signed up for a big party, but ended up running a marathon and finished the grand event with a good puke. Also, he is clearly the one most invested in studying the minutes after a meeting ;).

Then we come to the lady on the keyboard; it’s not ‘Orgel Joke’, but Emmely. She is our truly talented secretary. Did you know that she slept with two people in the same bed? (For the record: it was just sleeping and she was with her girlfriends). When you’re waiting for the toilet you might hear her sigh: ‘’Fuck, I’m so drunk,’’ when she’s alone in the room. She’s usually very punctual though and is the voice of reason when Bonno comes up with one of his outrageous ideas. Emmely is our dedicated cat lady, but will not die alone with 60 kittens one day, we are sure of that.

And last but not least, our newest addition to the team, Aylin. Another German (a very rare sight in Groningen ;)) with less punctuality and more humor than average. Her Turkish side attributes her to making delicious çay (Turkish tea) and her mother’s Turkish food (and her healthy appetite) has made her become the foodie she is today. Aside from stereotypical facts, which are slightly exaggerated of course, she can offer good laughs and even greater conversations. Being the latest arrival to the committee, she has filled the last and lovely spot of PR-Responsible.

So, we hope that our introductions did not scare you away, we can assure you that we are actually quite decent people. Trust us with your money pleaseee, so we can create some amazing merch for you (such as hoodies, towels or even an exciting face mask!) See you at the next physical social drink, as soon as possible!