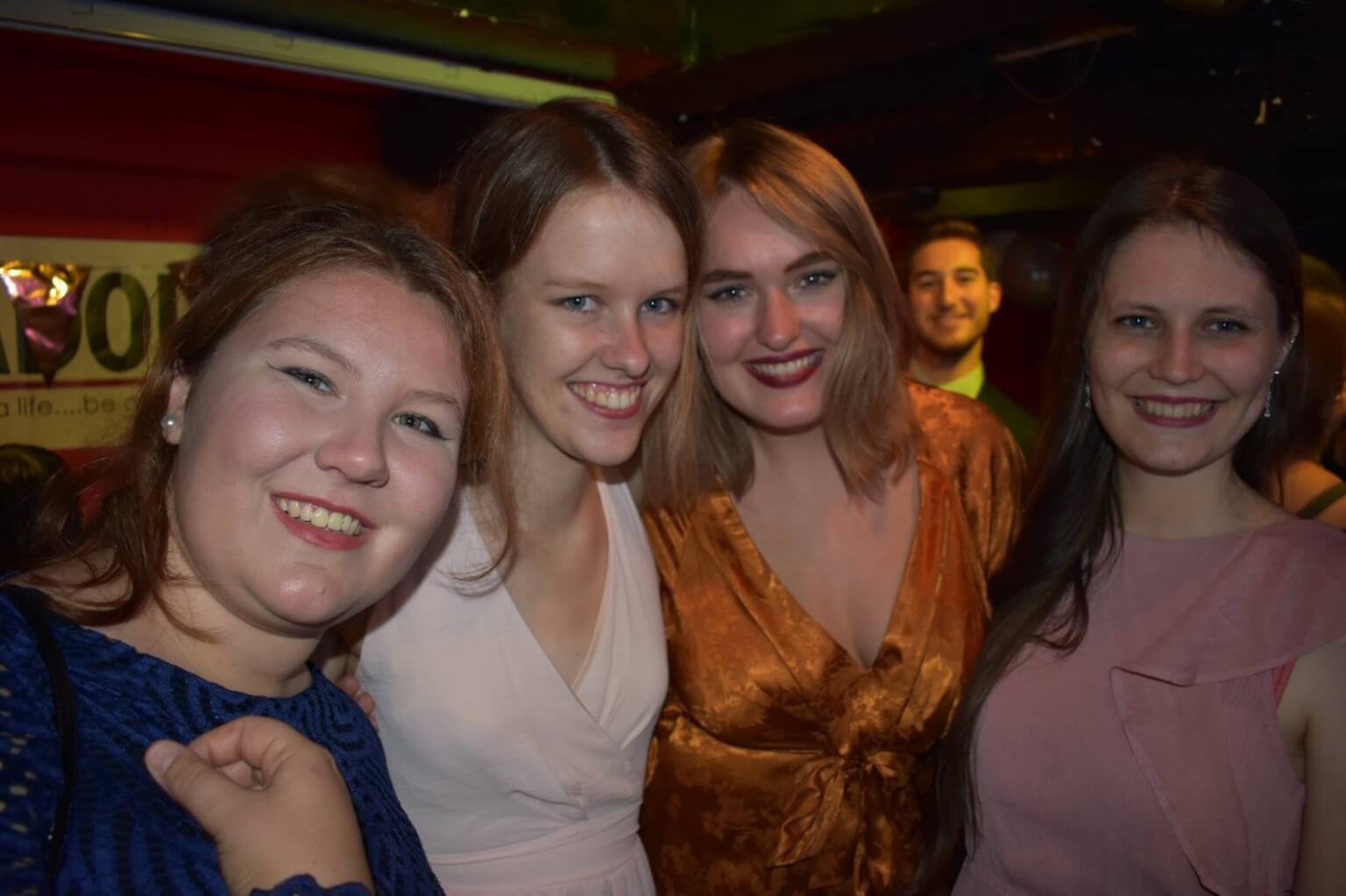 It has already been way over two months since the XXXIst board of AEGEE-Groningen has commenced her board year. I would like to emphasize the pronoun of her, because our board consists of four amazing and strong women. Most of you will probably have already met us at one of our events or the weekly drinks at the Brouwerij. If this is not the case, then this article will be a great way for you to get to know us a little better. And if you have already met us, then I can assure you that you will learn some surprising things about our board members.

Anyways, enough nonsense. Let us introduce ourselves, starting with the youngest board member and finishing with the oldest.

Charley Sjerps, or Charles for short. This alcohol-loving Irishwoman was born on December 6, 2006 and therefore earned herself the title of boardbaby. Legend has it that she was born with a glass of Guinness, with an egg in it, in hand, as a true Irishwoman ought to. Legend also has it, and this one seems even more plausible, that she downed the glass during the first seconds of her life. Blood does not run through Charley’s veins, but Guinnes does.

Anyways, back to the honorary titles, because Charley has many of them. Her official title is that of European Affairs Director, PR-Responsible and Vice-President. The unofficial titles are: IT-handyman, hey-Charles-could-you-please-open-the-window-responsible, and please-turn-on-the-printer-and-turn-it-off-again-responsible. We’re unsure whether she could handle more titles, but she seems to keep attracting more. Ruth, Tamara and myself all rely on Charley mostly as our head of IT, because whenever something goes sideways with our computers or personal devices, you will hear the words ‘CHARLEY HELP’ echo through the room.

One of the many competences that Charley has developed during our board year so far is insulting my face. As soon as I utter a few words, Charley will most likely have already responded with ‘no, your face’. To this day, she remains convinced that it was me who started this war of insults, but that must have been in a previous life, because I can’t remember when that must have been. Nevertheless, the insults are my strange way of showing affection, I do not know whether this goes for Charles as well. In either case, Charles, if you read this: you’re ok.

Now let’s go back in time to November 24, 1996. A wise old owl was born that day, by the name of Tamara Koekkoek, alias TamTam. To this day, I vividly remember the first question I asked TamTam: ‘are you vegan?’ I immediately picked up on the vegan vibes she gave off, maybe it had something to do with her having studied in Wageningen. Her answer, however, was a firm no, and it took me a long time to come to terms with the fact that she was, in fact, not a vegan. So, TamTam turned out not te be a vegan, but she definitely showed us that she is a morning person. As the board’s only morning person, her existence at the Pand can sometimes be a little lonely. However, she’s never truly alone, because the coffee machine she bought herself is keeping her company. She’s showing herself to be a true barista by making increasingly better coffee and provides #teamcoffee (TamTam and me) during tough mornings. Of course, TamTam was not born selfish and will also provide #teamtea (Ruth and Charles). Fun fact: TamTam likes her things to be neat so much that she has organized all our teabags by colour. This alone, should be plenty of reason for you to come to the Pand and have a cup of tea (or coffee) with us.

Anyways, on to TamTam’s many talents. Besides perfectly executing her job as Secretary and FR-Responsbile, she is really good at barfing in the fruit bowl on my desk. That bowl was originally placed there in order to be healthy and counter the inevitable weight gained during a board year, but that wasn’t to be, the stars did not align. We still tease her over doing this, but TamTam, if you read this, it’s okay. I’m over it. So people, feel free to come by the Pand for some fruit from a clean bowl for a healthy boost.

On to the oldest person of our board: Ruth Pieper, or Ruth for short. In English she likes to be addressed as Chiara, which I always manage to mispronounce. Sorry Ruth. I remember the day that Ruth and I bonded for the first time. As for herself, I think she doesn’t remember as much. Let’s say that I carried her off of two flights of stairs in the middle of the night (to be fair, Aad helped me, thanks for that Aad). This might lead you to think that there was some alcohol involved in this; and there was. As we know, Charles is great at chugging a few beers, but have you ever seen Ruth go at a bottle of wine? Trust me, that bottle will lose.

Other than being a great Treasurer (read PLEASE GIVE ME YOUR RECEIPTS), she has developed a peculiar diet. In her own words, she has never eaten as many ‘kaiser’-buns with garlic butter as she has during this board year. If you ever run into Ruth in the Albert Heijn Korenbeurs, be sure to get five ‘kaiser’-buns and the cheapest garlic butter. That should make her life a lot easier, which she’ll need. Because not only is she part of our board, she’s also still taking classes at the faculty of Law and working at the SSH Student Housing. Did you know that she’s sharing her kitchen with a 113 people?

Also, if you want to make Ruth’s day, bring her a Chai Latte. Or anything chai. Except for meat with chai, because Ruth is the only vegetarian amongst the four of us. We often forget about this, or should I say, I often forgot about this. I just didn’t receive as much of a vegan vibe as I did with TamTam.

The only thing left to do now is introduce myself. I’m not the oldest, so the order which we set out to do this in, is not right anymore. However, introducing myself before the others would have been rude. So here’s some facts about me: I’ve travelled around the sun 22 times, I have a bachelor’s degree in Biomedical Sciences and I’m in love with every dog on this planet. I could go on and on about how awesome I am, but I think it would be better to leave that to some of my friends.

NY Times: “Annelies has to be the funniest person alive, go see her at one of her shows. She’s always at the Pand.”

Charles: “Could be worse. However, she would have been a lot better with a different face.”

TamTam: “You can’t mention Annelies Kamphuis without mentioning her unconditional love for pugs. This love is so important for her that a framed picture of a pug decorates her desk since the first day of our board year (it’s next to the delicious fruit bowl).”

Ruth: “Half president, half ginger and vegetable smoothie. She always forgets where she parked her bike, so you’ll often see her walking places. Other than that, she’s okay.”

Anyways, on to more serious matters, which I’m also capable of. I am honoured to be part of this amazing board during this beautiful Lustrum-year. The first two months have already been some of the most memorable moments of my life. As a board, we put all of our energy and passion into our great association, and we get even more in return from you guys. Every member is an indispensable part of this association, and I would like to thank all of you for making AEGEE-Groningen into what is is right now. On behalf of the other board members and myself, I would like to say that we very much look forward to all the upcoming events and trips, during which we will hopefully meet and get to know every single one of you!