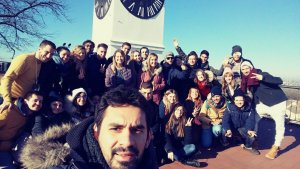 On the 27th of December I flew to Niš together with my AEGEE-introductionsons Erik and Joost. We got accepted to the New Years Event of AEGEE-Novi Sad, but travelled a day earlier to Serbia to spend an extra day in Niš. In Niš we stayed in a really fancy apartment in the middle of the city centre. We were amazed that it only costed us 21 euros. This first day we visited the Niška Tvrdjava, an old fortress, and we had dinner in a typical Serbian restaurant. That night we did some bonding by drinking cheap cocktails, losing money in a casino and even visiting a fancy bar. In the bar we figured out that it’s important in Serbia to reserve a table in the club beforehand. Of course we hadn’t done that which turned into an awkward situation since everyone stood around their reserved table except for us. We were just dancing in the middle somewhere between the tables. The day after we visited the local market (big recommendation!) and took the bus to Novi Sad, which took us five hours. Of course we missed our bus and forgot to pay extra for our luggage, but with some delay we could take another bus and finally our real adventure was about to start in Novi Sad! More than twenty participants and several organisers were already waiting for us. After some short introductions in the hostel the Dutch ghetto was separated because we had to sleep in different dorms, although there was no time to take a nap. During this first night we played an introduction game and we enjoyed the opening party in the city centre! 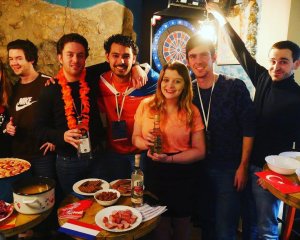 The second day everyone stood up early because it was time to get to know Novi Sad by playing a city quest. We all got separated into small groups and had to solve riddles to find the next location of the city tour. We also had to make interesting pictures at each of these locations and ask different questions about Novi Sad to strangers. I even got wedding proposals combined with money offers, but unfortunately the guys kept the money after the picture was made… Luckily my group won the city quest so we earned a magnet of Novi Sad. Which Dutchie doesn’t get happy from free stuff?! That evening it was already time for the most important night of each AEGEE-event: The European Night. The other Dutchies and me had brought Goldstrike, Jenever, stroopwafels, rookworst and some other things. During the night we tasted the most outstanding European foods and drinks, including: Spanish jamon, Greek Ouzo and homemade Rakija. The Russian girls even brought a traditional Russian headdress, with which you could take pictures. It definitely was a fun night!

The morning after, everyone was quite hungover when we visited the Petrovaradin fort. Luckily we had the best tour leader ever who cheered us up with funny jokes and interesting stories. Imagine an hungover group of students walking slowly through the dark underground when suddenly the guide stops to warn us: “be aware for the most crazy animal that still lives in the fort, he only comes out at night and is known for sneaking his preys from behind….. Me!” He also sang some beautiful songs for us, including wrecking ball. 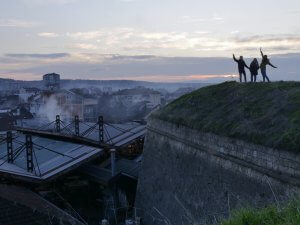 In the afternoon we went ice skating. Some people were real professionals and some stepped on the ice for the first time in their lives. I was just really happy that I didn’t fall and that nobody got injured. I think that’s quite a good achievement.That night it was time for a pub crawl through the city centre. We were again split up in little groups and had to do some crazy assignments in each club that we visited. At the end all groups ended up in a club where we had one of the best parties ever!

tI felt like we only just arrived when the 31st of December already began! After the amazing party of the night before it was time for a Serbian tradition: day parties! After we were woken up, we had a sandwich and we went back to party in one of the bars of the night before. It was really crowded in the bar-street which was full of Serbians who were dressed up really fancy. So our group started drinking and dancing again and we were also playing a game at the same time. The participant who wore the green devil ears could give an assignment to one of the participants. If the participant fulfilled it, he received the devil ears and so it continued with people dancing on the bar and publicly exclaiming how much they loved this event & Novi Sad. After this day party we started preparing for the 20’s themed new year’s party. Everybody did their best and  looked really fancy. When we arrived at the party venue we first celebrated the Russian new year with champagne, starlets and mandarins. At midnight we counted from ten to one (or at least I think and hope so, since people we’re counting in Serbian) and celebrated the new year with confetti cannons and wishing everybody a happy new year. Around two we went with a group to the main square where there was live music. We even did the polonaise through the crowd!

At the first day of 2018 the most relaxing day of the event took place. We played secret Santa (thank you again Tamara for the chocolate and the heart!) and we watched a movie. At night we went to a pub where we drank some beers and had good conversations. I also went to the Serbian McDonald’s with Joost, which was a personal highlight of the trip for me (28th board tradition <3)! Afterwards me and some other participants did a drinking game in the hostel before going to sleep. Back in Niš I had bought the worst bottle of Rakija ever so I was very happy to share this with the others. Also one of the participants was renamed during this night (apparently it’s quite difficult to remember some names after a few crazy days haha). Luckily Josib and Bogdan sound quite similar.

Then it was already time for the last ’real’ day of the program. Because we hadn’t had enough alcohol during the event we went to Karlovci for a wine tasting! I expected that the wine tasting would take place in the afternoon, but it actually started around eleven in the morning! We tasted five glasses of wine in about an hour and got an explanation about the different wines by the owner. The wines tasted really nice so most of the participants bought a bottle of wine afterwards. Since it was the last day of the event, most people opened their bottle immediately and drank it during lunch and a short city tour. If you are planning to go to a restaurant in Karlovci someday, I recommend to ask for a dish without raw onions. We decided it was the specialty of the village since our plates were full of pieces of raw onion, which took the cook around an hour to cut. It was very funny and unbelievable. In the afternoon we went back to Novi Sad and had a treasure hunt during which we had to perform five scenes from famous movies. This also ended up to be really funny. My group even had Drunk Erik as a guest star during our version of Saving Private Ryan (a.k.a. Saving drunk Erik from Vodka). During the night we did karaoke and went to a club afterwards. We danced the night away until it was really time to go back to the hostel for the last time.

The next morning me and three other guys were the firsts to leave the event. Two other Dutchies and me had to take the bus to Belgrade to take the plane back to Eindhoven. During this trip we took advantage of every little moment to catch up on some sleep. 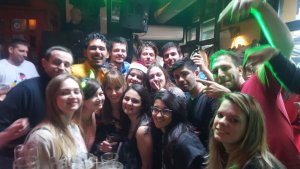 But how were Serbia and Novi Sad? Before this trip I really didn’t know what to expect and I didn’t really do any research (typical..). But I have to say that I loved Novi Sad! The city was beautiful, big and modern. It has an amazing church, in which Joost will marry someday (he told us this more than fifteen times) and the inhabitants are friendly and honest. I definitely recommend to visit Novi Sad if you like Pivo (beer) and meat. The only thing I didn’t like was the lacking of a prohibition to smoke inside of bars and restaurants. Since it is prohibited in The Netherlands for a number of years, I thought this was kind of strange. But to go back to the event: AEGEE-Novi Sad really organised an amazing event. Everything was taken care of and we slept in a nice hostel. I want to thank all the organisers for all the efforts they made and I also want to recommend you to visit an event organised by AEGEE-Novi Sad! They won’t let you down.