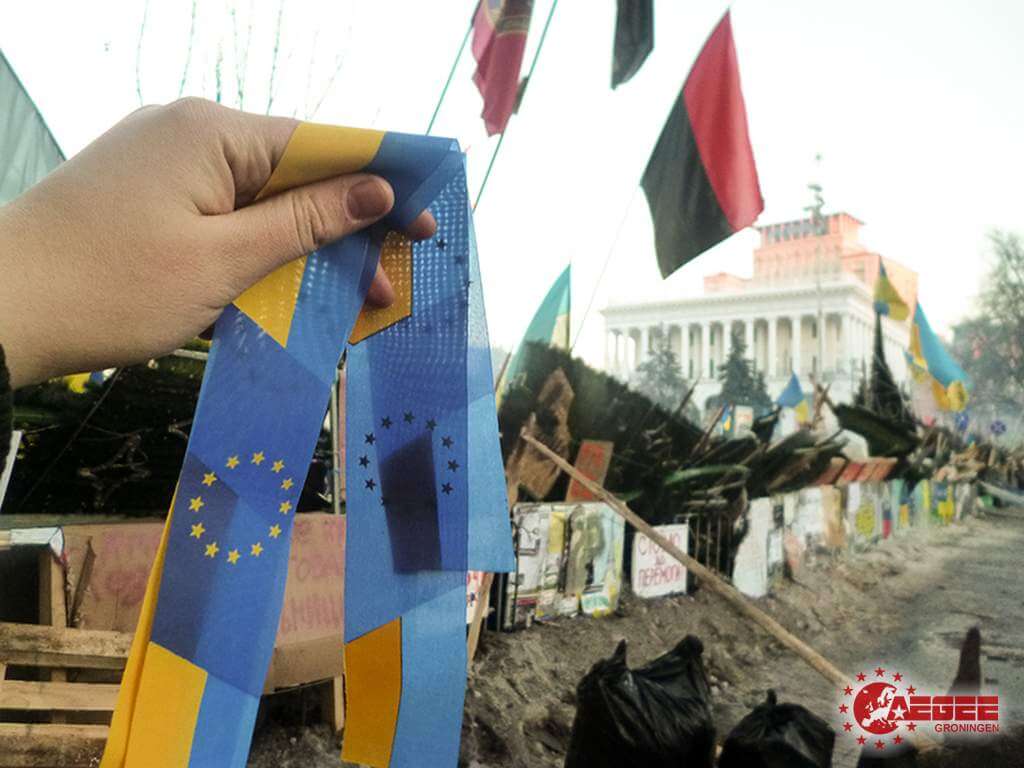 The crackdown by Ukrainian police forces has worsened up to the point of deadly casualties. Amongst the Ukrainians contesting the leadership of President Yanukovitch in the EuroMaidan protests in Kiev, and criticising his dismissal of an EU association, are many student protesters. EurActiv gives a tribune to one of them, Anna Gots.

Anna Gots is participating in the euromaidan protest and is on the board of the European student forum: AEGEE-Europe.

“Ukraine has not yet died, nor her glory, nor her freedom,
Upon us, fellow Ukrainians, fate shall smile once more.
Our enemies will vanish like dew in the sun,
And we too shall rule, brothers, in a free land of our own.
[…]” Shche ne vmerla Ukraina, Ukraine’s national anthem

Sadly, the lines written back in 1862 by Pavlo Chubynsky are reflecting Ukraine’s reality more than ever these days: the Ukrainian people face the need to fight for their freedom once again.

16 January has been immediately labeled as ‘Black Thursday’, for the reason that, never before since the proclamation of its independence, Ukraine has faced such a severe violation of law and democracy in one day. This week, violence got even worse: people were killed.

Almost two months of peaceful protests and hopes for amicable negotiations with the government, hopes that the rule of law and democracy would govern again soon, were answered with the adoption of a radical law that limited the fundamental freedoms of Ukrainian citizens.

On 16 January, a bitter realisation came that the children born on 17 January would, once the notorious bills were signed by the president, become citizens of a completely different country, where to talk freely, to move freely and to think freely is prohibited.

What happened on Thursday at the Verkhovna Rada – the Ukrainian Parliament – was absolutely irregular. During a hectic session, where the Speaker was not able to perform his responsibilities due to a filibuster arranged by the parliamentary opposition, the vice-Speaker suddenly started to introduce new obscure bills one by one, without allowing any time for discussion. Moreover, a vote on them was also forced. The voting system was not functioning due to the aforementioned blockage, yet the votes were magically counted within several seconds only.

As a result, Ukrainian citizens were imposed a new framework aimed first and foremost to strangle any remainders of EuroMaidan, as well as to prevent any attempts of dissenting governmental decisions in the future.

From now on, any ‘movement’ of five or more cars is a sufficient reason to fine the drivers up to 40 to 50 times the minimum wage before tax, or retire their license for up to 2 years.

Any unregistered representative of the media acting as such can be highly fined, with the respective media equipment confiscated. Furthermore, for spreading “extremist materials” a journalist risks to end up in jail for 3 years (No to Freedom of Expression).

Any massive gathering is forbidden unless the police is notified in advance and a permission is granted (No to Freedom of Assembly and Association).

A person can be judged even without being present in the court (No to the Right to a Fair Trial).

Also we shall not forget that henceforth the country is full of “foreign agents” (many of the civil society organisations which receive funding from foreign countries, but also universities, for example), which according to the new law are losing their nonprofit status automatically, and therefore are subject to tax.

As a response to the adoption of these laws, Ukrainians gathered at the main square again, more outraged than ever, demanding the opposition to present themselves with one leader and a concrete plan of actions. The political elite answered disappointingly: The citizens received the response that the leader is the nation itself and the action is in their hands.

No surprise that the action followed immediately at the very same night in Kyiv: Buses of Berkut police (special military service) and ticket offices of the Dynamo Stadium were set on fire, old ladies and students jointly disassembled the paving and handed the cobblestones to the most violent protesters in the front line, tens were injured among the police and protesters, hundreds of shocking images were spread around the globe by the news services and social media.

At the very same time, in other regions of Ukraine, proactive citizens started tracking down squads of Berkut which were mobilised and prepared to be sent to the capital, in an attempt to prevent their dislocation by any means.

The Government has reacted fast and has sent Berkut police in big numbers. Allegedly, they have also hired provocateurs, which are also known as “tytushky” (mostly poor workers from the regions mixed with criminals) to clean EuroMaidan from the cars and barricades the following night.

Is it the beginning of the revolution, or even worse, the first steps of a civil war in Ukraine?

When the main authorities were the first ones to discard all the common rules of the game, they gave power to the Ukrainian people to act under extraordinary circumstances. The rules and principles citizens used to believe in for decades were proclaimed no longer viable in one day, but this does not mean the people would accept the new ones. Feeling betrayed by both government and opposition, the citizens started to act on their own.

European and US leaders are condemning decisions of the government and the president, and support the restitution of the fundamental rights of the Ukrainian citizens. The EU keeps emphasizing that the door to Europe is still open to Ukraine once the crisis is overcome, but there is now time to see if all the tension coming from external actors (including Russia) will not be an aggravating problem in a country that risks to be divided in two.

Questions with difficult answers lay ahead: Will a new leadership emerge to show the way out of the crisis, to regain democracy in a country whose people has been struggling for it through its whole history?

Will this new leader be able to free the governing structures from corruption and to respect and finally take into account the needs of the citizens when taking decisions?

The Ukrainian nation still believes in itself, and until a leader is found people will keep fighting on their own.