The topic of the Think Tank on the 5th of October was the AEGEE-Groningen Application. The main goal of the evening was to discuss the future of the project, which has been worked on for the last couple of years, and to assess the enthusiasm of our members for an alternative.

During the evening we discussed the past experiences of the members who worked on the project, why the app hasn’t launched, the wants and needs concerning the potential app, and the alternative idea of creating a closed-off part on the website. In addition, prior to the Think Tank a survey was distributed to all the members to give their opinion on the topic. The results of this survey were also discussed during the Think Tank.

Firstly, we started off with informing the attendees about the current situation of the application and the experiences of the past members working on the project. In short, in the beginning the development went pretty quickly. Unfortunately, the webforge team/web committee ran into a couple of problems before they were able to launch the app. The problems mainly concluded to a lack of financial means to realise the project because of the licenses, as well as the loss of the sponsored server space in the second year. In the previous year an attempt was made to revive the project but unfortunately it did not succeed as they were unable to use the (adapted) code of the previous committee working on the application. Most of the members who worked on the project expressed they thought it would be better not to continue with the project, and another possibility was suggested: A phone-friendly closed-off part on the website.

Secondly, we discussed the results of the survey. The results are based on a total of 21 responses.

The survey indicated that WhatsApp and Facebook are currently the most important channels for members to get information about the events and activities of AEGEE-Groningen. Instagram and the weekly mail are sometimes also used to get this information. The website is used the least.

Our members are generally okay with the current situation (mean of 6.05 on a scale from 1 to 10). However, it is clear that there is room for improvement in the provision of information towards our members. 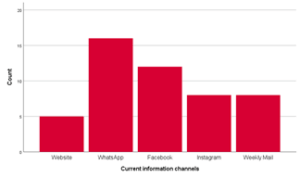 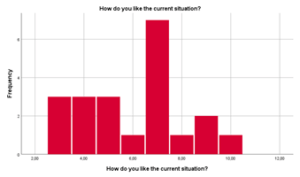 Alternatives to the current situation

The two alternatives that could be added to the current situation are an app and a private part of the website. Although the results show that there are definitely some people interested in an AEGEE-App, there are quite some people who don’t deem an app to be necessary. The average feeling of necessity to create an app (5.40) is actually lower than the average feelings of satisfaction with the current situation (6.05). It is clear there is more enthusiasm among our members to create a private part of the website, with a mean of 7.81. 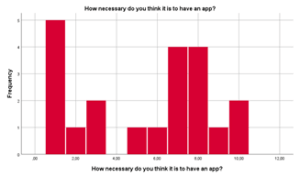 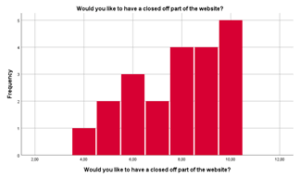 Willingness/abilities to work on the project

Conclusion of the Survey

After the Survey the future of the application was formally discussed. Considering the past experiences and additional factors, such as the limited availability of skilled and motivated members to work on such a project, it was concluded that in general members were not enthusiastic about continuing the project.

Furthermore, the future of the website was discussed. There was some general enthusiasm from members to have an online platform for AEGEE-Groningen for the purpose of sharing pictures of activities and events, seeing the AEGEE-Groningen agenda and for signing up for activities. For this the option of a closed-off part of the website was discussed, from which a mild interest of the members could be concluded.

Lastly, the board presented their opinion as well as their willingness to explore the possibilities further and find out what is feasible. We do not believe the project of the AEGEE-Groningen is feasible, and do not wish to continue it. There is an interest in the alternative, and we hope to gain more information about it before the semi-annual GMA. So stay tuned!