Thursday, the 28th of February, what a day it was. Early in the morning my day began with my friend Erik and me discussing how we were going to return the flag of AEGEE-Groningen that we confiscated at the weekly social to test our security. What if anyone could just walk into the Brouwerij and steal our flag? What if someone would just take it home and sell it on the black market for Bitcoins? No security cameras or guards were present, no boobytraps were sprung either. Obviously our security check failed, but I digress.

Once sitting in the train to Eindhoven, someone asked if we had already checked-in for our flight online. Carefree and naïve as I was, I mentioned I hadn’t but that it probably wouldn’t be an issue because I could just check-in at the airport like I had done in another flight the month before. What I didn’t think of however, is that for this specific airline (which will not be mentioned because of reasons), checking-in late automatically means you will be put aside when too many people show up at the gate. Airlines always overbook flights on purpose because some young, adventurous students who lend money from the government with 0% interest every month book flights without attending at the airport because they just like to book them whenever they’re the cheapest. These holiday pirates were not the problem however, the problem was that at that day, at that time, at that specific flight almost all passengers showed up. “Why can’t I choose a seat?” I asked cautiously with a hint of concern in my voice. I had checked-in too late to download my boarding pass, what I had received instead was a standby pass that I had to show at the gate. It did not take long before I found out Ruth had the exact same problem as I did…

The line at the gate was long and the longer we had to wait, the more I realized in how much trouble we were. When we had finally reached the gate, we were put aside without entering, which made us very impatient as we still didn’t know whether we could enjoy our excursion or if we had to go home. Eventually, when all other passengers had passed through the gate, we had to show our standby pass and our passport. The employees at the gate made a call to the administration, during which the image of me sitting alone in a train back to Groningen became very vivid and the possibility of which became very real. Eventually we could pass through the gate because we were travelling with a group, though finally everyone could pass through safe and sound and the plane took off with all seats occupied. 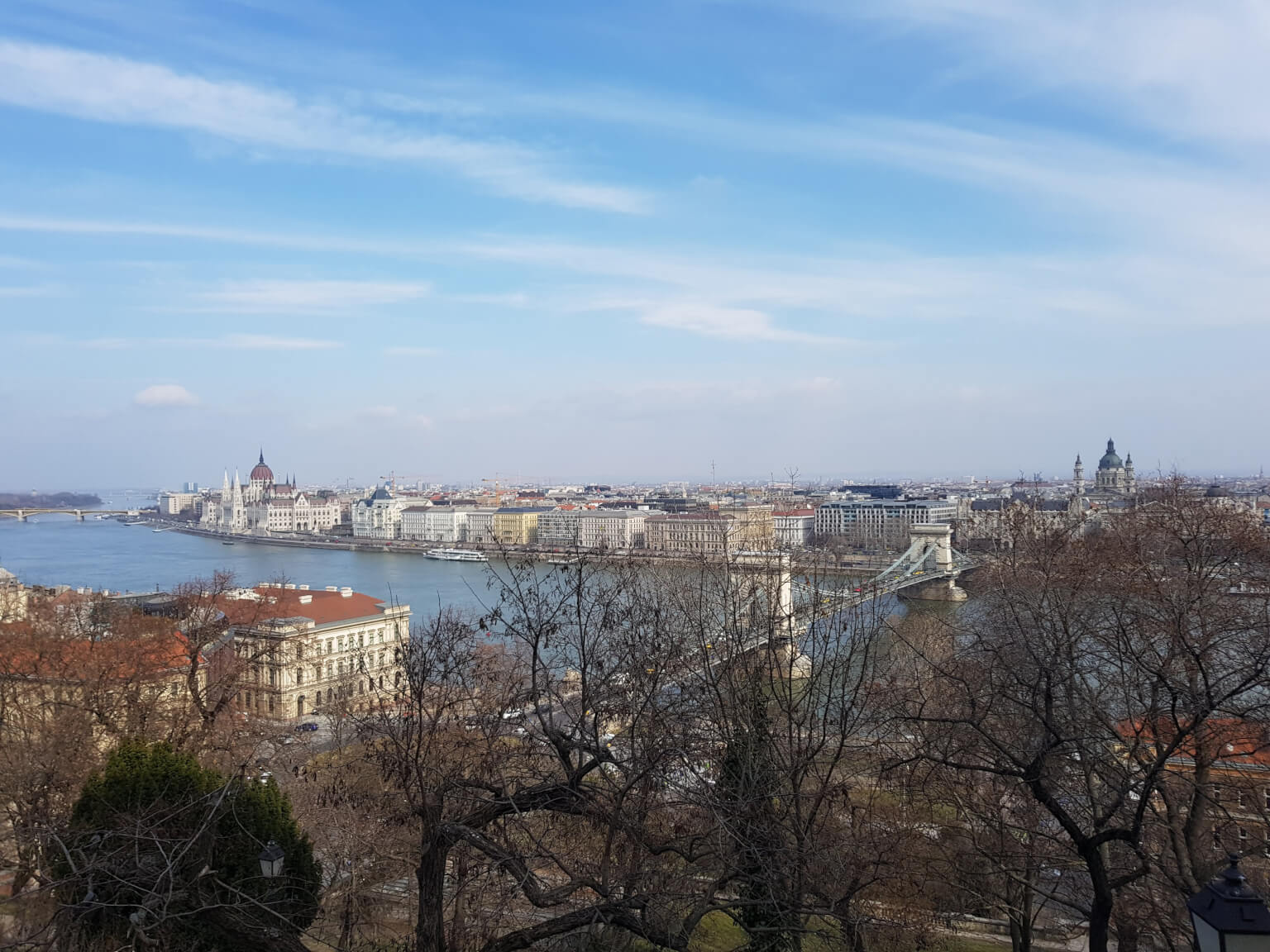 The feeling of relief you get arriving in Budapest after such an ordeal is immense. We went to a restaurant immediately after leaving our luggage at the hostel, which is when we made first-contact with the Hungarian cuisine. Now sit back, take a breath and close your eyes as I tell you about these dishes, make sure to place a bucket in front of you so you won’t wet the floor as you salivate while picturing these authentic Hungarian foods! Steaming-hot Hungarian goulash, a traditional meat stew with vegetables, potatoes and spices like paprika. Paprika and sour cream are staples of the Hungarian cuisine and used a lot in their dishes. Another dish that was better than anything I had imagined, was their paprikás. This delicious contribution to mankind consists of chicken, dumplings, butter, paprika, garlic, peppers and onions, creating an umami flavoured masterpiece best served with sour cream. I could talk all day about these culinary marvels but it’s better if you experience these for yourself, perhaps with a sör (Hungarian word for beer) or two, just make sure you don’t clink your glasses when you say cheers as that is not done ever since the Hungarian revolution against the Habsburgs.

The next day we took a city tour in which we learned about the three cities that make up Budapest, Hungarian traditions, the Hungarian language and the country’s history. After the city tour the group went to the spa, but due to my report deadlines, this is where I had to part from the group for a while. I am sad to say that I have missed the thermal baths, which were breathtaking especially in the evening. I am sure it would’ve been an amazing experience but it didn’t affect me too much as I was already grateful I didn’t miss my flight the day before, so this just seemed like a good excuse to return to Budapest one day. We went out into the city and drank some beers in a bar but everyone was a bit exhausted from the long day.

On Saturday we took a train to the city of Esztergom, the capital of Hungary in the Middle Ages. We hiked for a while and went sightseeing, after which we returned to Budapest at the end of the day. Esztergom was very tranquil and felt a lot more like a town compared to the huge city of Budapest, so it was a very welcome change in scenery. That night we went to a ruin-bar, Szimpla Kert. Ruin bars are essentially bars stationed in old, abandoned buildings, stores or lots in the old Jewish quarter, they started in the underground scene but are now known worldwide. If you want to go out in Budapest I definitely recommend these ruin bars.

That Sunday most of the group went home, but some stayed for one more day, even less stayed for a second extra day. We went to the Terror Háza Múzeum, a museum that displays the role of communist and fascist terror in Hungary’s past. It was an incredible eye-opening experience that you really should go to if you are interested in these topics, but I do recommend you to be well-rested. The day afterwards Gert-Jan and I went to the Hospital in the Rock, a museum in an old nuclear bunker underneath Buda castle. It was built in a series of caverns in the second world war and was used in the cold-war era as well. We left Budapest at around six o’clock in the next morning, this time without any flight problems.

All in all, when you go to Budapest what you can expect to experience is an old city with a new face. Hidden underneath the façade of Hungarian architecture is a modern jewel with a lively underground nightlife and delicious cuisine. It is no wonder this city is called the “pearl of the Danube”.