This year AEGEE-Groningen has once again been able to organise many amazing trips. While this kept us excited it also gave us a new opportunity to revisit some of our favorite green modes of transportation. The Board has used public transport like busses and trains and they even hitchhiked to reach their destinations! This led to some fun competitions to see who would reach the destination first. Members could follow our competitions or journeys on our social media pages. Due to COVID-19 we could not restart the hitchhiking committee this year which usually organises 3 competitions throughout the year to help our members discover Europe sustainably. However, that did not stop our members! They used our member’s initiative to organise a hitchhiking competition to Lille with a bunch of challenges to complete for extra points along the way. Two of our members, Astrid and Cedric, will share their road to victory in this article. 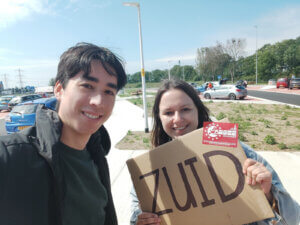 The journey of Astrid and Cédric to Lille started at 10 in the morning at the hitchhike spot in Groningen. Still a bit hungover from two canti in a row, and a train journey with Mark from Nijmegen the night before (you can imagine what that was like), we got our first ride at 10:07. We drove to Zwolle, accompanied by Floris the dog. While waiting for our next ride in Zwolle, we protested against shell and climate change at the gas station, with a sign saying “Burn borders, not gas!” – very AEGEE-like. 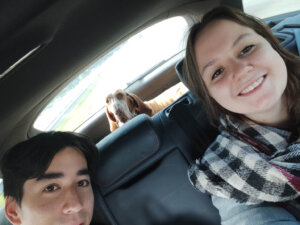 From Zwolle we got a ride to Utrecht, but there we ran into a problem: there are no gas stations before Utrecht! So instead we ended up at  P+R Utrecht science park. Which did not have a lot of cars on a Saturday afternoon – a slight problem. So instead we stood next to the entrance to the highway and waited… for only half an hour! Then an old member from L.S.V. Minerva who liked hitchhiking picked us up, with whom we sang the beautiful song of ‘Brabant’ by Guus Meeuwis, while driving to Brabant. We also tried to give our hitchhiking mentors, Lars and Jess, a call, but without a lot of success (don’t try to get lunch while you should be watching us, Lars!). Luckily, our amazing Minervaan still gave them a call after he dropped us off in the beautiful city of Gorinchem (pronounced “Gor-in-chem” according to Cédric). In Gorinchem we managed to get a ride to Breda which accidentally brought us to the city center. Astrid got a call from her mom, asking why the hell she was in the city center of Breda. She did not have an answer to this. 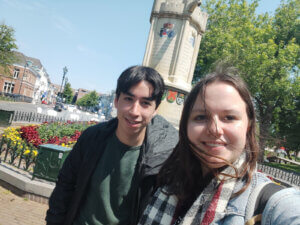 After almost an hour we finally got out of Breda by asking some sketchy-looking people if we could drive with them in their sports car (more points, hooray!). At a gas station just outside Breda we finally encountered some luck, and got a fun ride directly to Ghent. In Ghent we decided to go for some more assignment points, and Astrid attempted to get a ride in French. Which was… partially successful. After a few words we had to switch to English, but we managed to get our last ride to Lille! However, there were some slight issues – a lack of car keys, mainly. After we listened to some heated, French discussions, from which we understood about half, Cédric turned around and found the keys. On our way to Lille we went!

Even though we were one of the last hitchhiking couples to leave Groningen, we were the second to arrive in Lille – at 18:18! Only Annemijn and Niek arrived earlier than us.  Because we were the first groups to arrive, we got placed into the same apartment, which we called ‘the Superiority Complex’. Unfortunately the apartment itself was not that superior, given the broken sleeping couch, so Astrid and Annemijn found a comfortable spot on the floor instead. But of course the people were superior: on the last evening in Lille, while enjoying some Affligem blond, we were announced as the winners of the hitchhiking competition 2022! Even though Annemijn and Niek were 8 minutes faster than we were, we completed a lot more challenges (thanks to the amazing hour in Breda, and our friend the Minervaan).

All in all, sometimes being sustainable can be fun! All hail Superiority Complex.