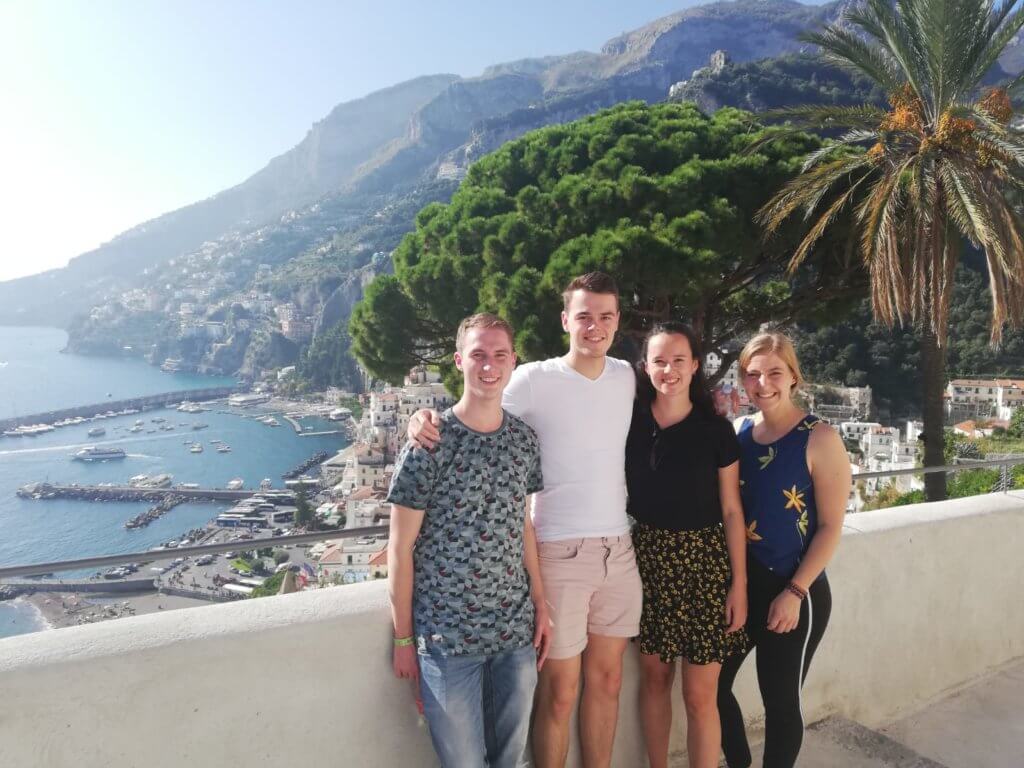 You might have noticed us already during (introduction) activities, the social drink or maybe while wandering the streets in the city center. Perhaps you’ve even been approached by us to have a short slightly awkward committee conversation. Or maybe you just recognize our faces from the posts in the Facebook group and Instagram Stories. It’s been over two months since we were installed as the XXXIInd Board of AEGEE-Groningen, so we thought it to be about time to tell something more about ourselves.

We will start with our Secretary and European Affairs Director Arend-Jan. Hummus could be his third name (besides Afgang, Aegle or Vincent to name a few), as he recently developed an addiction for this substance. Did you know that when Arend-Jan touches his throat, music comes out? Are you also as curious what this would sound like if he would do this while downing a beer? Despite the fact that Arend-Jan likes a glass of any alcoholic liquor at times, he functions surprisingly well the day after. This mathematician for sure is an unusually happy morning person, one-of-a-kind. Combining his love for AEGEE with that for travel has resulted in a list of AEGEE locals he would like to visit in the near future. However, after Bilbao, Zagreb and Moscow, there is a big chance he will go back to his beloved Sardinia.

Second board member to introduce is Arjan, our board baby. He remembers everything after only having read or heard it once (provided he is sober), which certainly comes in handy when being the Treasurer. Arjan therefore is also very good at trivia, he knows a lot about for instance Rome, which is his favourite European destiny. If a technical issue occurs, Arjan as our unofficial official IT-Responsible comes to the rescue, walking as fast as he can. However, even though being a Computing Science student, he has a love-hate relationship with devices. At times he might actually start arguing with it, often ending the monologue with the word ‘cheese’ that then echoes through our spacious office. To refer back to walking, he is actually pretty fast both forward and backward, it might be that he developed this skill because of his small bladder.

Have you always wanted to know who makes these awesome Instagram Stories? It’s Anne, our Local Affairs Director and PR-Responsible! Our sweet geographer earns the title of ‘the Europetrotter’ as she has visited most European countries of the four of us. In the future she might become a member of one of the newly emerged locals, Sarajevo, as this is the city closest to her heart. Whenever she is visiting a new place, Anne can be so thrilled by all the impressions she starts speaking a few octaves higher than usual. However, at times she has her moments like any other, especially when she has had one shot of limoncello too many the night before. At these occasions, Anne prefers to, as she calls it, ‘chill all by herself’.

Now I will give the symbolic pen for a moment to my Secretary to introduce me in the same way as I did with my fellow board members as it feels somewhat inappropriate to do it myself.

So last but not least… Our semi-Spanish President and FR-Responsible, feared for her voice messages and loved for her crying laughter, Margriet! Margriet is the only board member that has never hitchhiked yet, although rumours say that she will try hitchhiking to Bilbao soon. Even though forbidden by the rest of the board, she keeps speaking Spanish. Her love for the country (and the people…) is so great that the office music is almost fully Spanish! According to an anonymous board member, her taste of music is the worst of all of them, even though we all secretly love the Spanish vibe. Her second home and second family is in Baselga Di Pine, Italy, where she went on an exchange during high school. After Margriet had single alcoholic only one drink, she starts laying on the ground and running away to get pizza.

All of us individually feel honored to be part of the board of this great association. Without you, our members, there is no association so thank you for being part of it! We think you are awesome and this is why we will gladly continue with the slightly awkward conversations to getting to know you better one by one. We have already spent amazing moments with you these past two months and we are looking forward to many more unforgettable adventures to come!