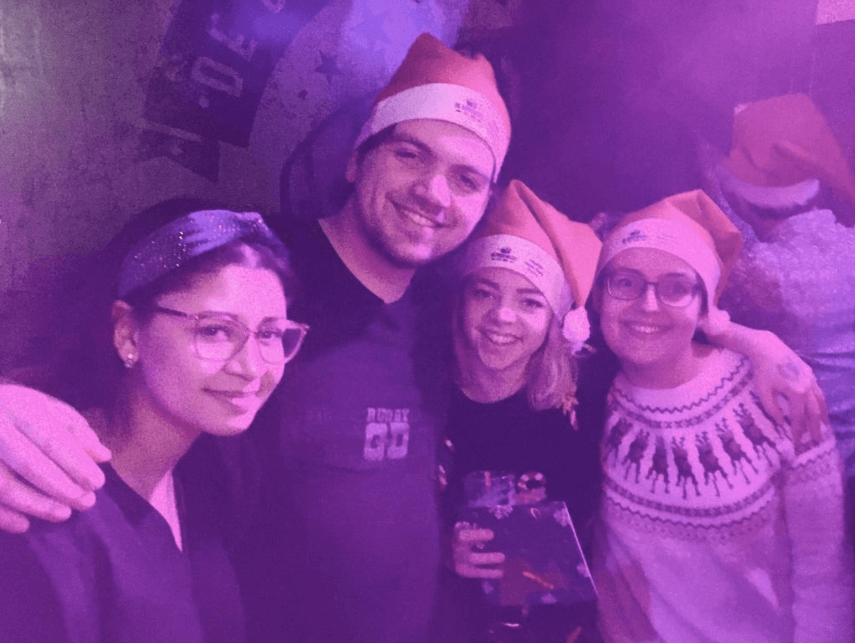 While everyone is (hopefully) busy staying at home and trying to entertain themselves during what seems like months of quarantine, we, the almanac committee, are busier than ever, creating the next annual compilation of AEGEE-Groningen in all of its glory! We might not be exactly on the foreground, but do not confuse that with not doing a lot, as we are probably just as busy as the rest of you. So, maybe you’re wondering who the people behind the writing of this almanac are. Allow us to introduce ourselves:

Sterre is our chairwoman. She is responsible for controlling the chaotic bunch that makes our committee. She is studying European Languages and Cultures, which is handy because now she can secretly curse at her committee members without them understanding her. Whenever she is not travelling, she can be found watching her favorite comedies and reading a crapload of books. Now, in the midst of the corona     virus she is spending a lot of time walking her dog, doing puzzles and pretending to do useful things while sitting at home staring at the birds in the garden.

Michiel is our commissioner of promotion and is responsible for the enthusiastic messages (or spam, however you want to see it…) you might find in the whatsapp and facebook group occasionally. He studies linguistics, which basically means he’s not sure what to do later on after graduating, and preferably doesn’t want people asking (it’s a linguistics student thing). His range of interests stretches much further though, from playing bass guitar to football (the European (read: superior) version, that is) and not to mention travelling obviously! When he’s not binge-watching the next series on netflix he might be caught playing on his bass, practicing for his band to which he can give even more time during this quarantine.

Shenza is the secretary for the almanac this year. She studies Information Science, which means she’s behind her computer about 90% of the time that she’s awake (such a dedicated student, totally not watching Netflix or Youtube). The other 10% she is probably reading, trying to figure out her camera or cuddling her dogs. However, the most important thing to know about her is that she hates coriander with a burning passion (it is the actual devil). She’s currently trying to learn to do splits, because she once randomly saw her English teacher do it in school and it looks like a good party trick to have when you’re 40 (it’s probably not going to happen and there is a good chance she’ll just injure herself, but a girl can dream).

Djené’s title is treasurer, but with only one expense (the almanac), you will not find her looking through the numbers very often. You are more likely to find her working behind her computer, cursing at Indesign (she has a love-hate relationship with the program). She studies Computing Science, where she has learned to consume an unhealthy amount of coffee and where she still hasn’t learned why her code does not work (or maybe it is supposed to explode every fifth time, that’s also possible). In her free time, she knits and cooks delicious meals with every ingredient except chocolate (it’s inedible to her). Her new goal is to make her room tidy and presentable. Not that she is getting visitors during these times of social distancing. It is just something she has never had before.

As a committee we’re very down to business whenever we have a meeting, since every time there is a lot to discuss and if we would talk about unrelated stuff it could take up to 4 hours. We are all super organised people with tight schedules (except for Wednesday evening, of course :D), so we prefer to keep it as efficient as possible. That doesn’t mean we don’t lunch or have dinner together occasionally, we want to keep it fun too in between discussing, per example, how many words an article needs to be! In short, a disciplined committee that still knows how to enjoy themselves, regardless of the amount of work that has to be put into making this almanac!

We all hope you will enjoy our almanac that we hope to bring out at the end of this study year! Be patient and stay safe everyone!