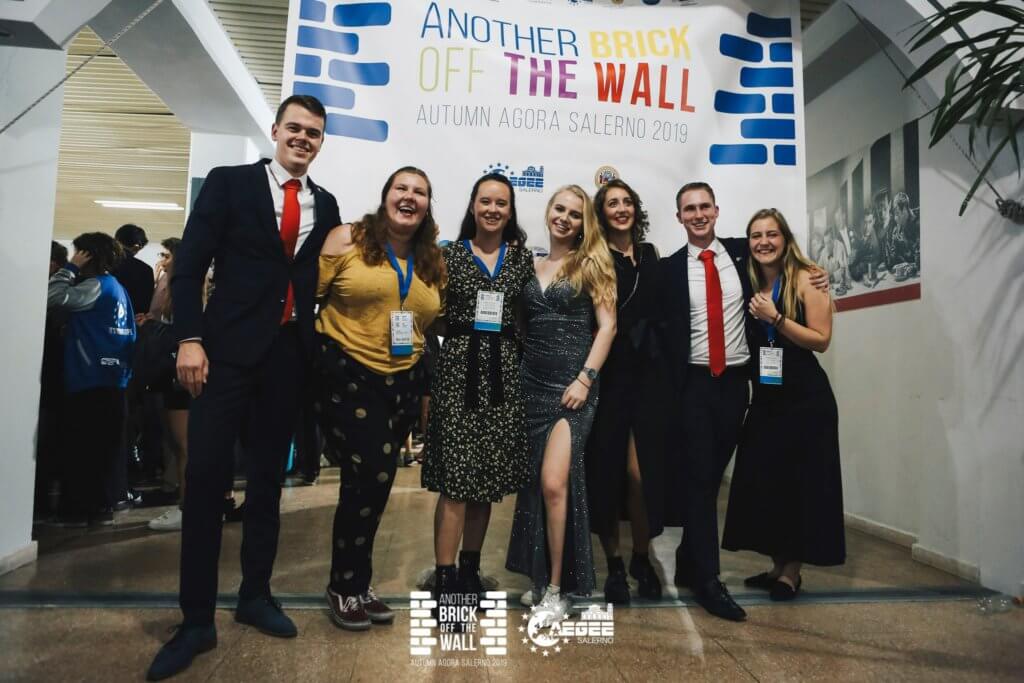 From the 23rd of October to the 26th of October, the Autumn Agora 2019 took place in the Italian city of Salerno. At this Agora – which is the bi-yearly General Assembly of AEGEE-Europe – a lot of important topics were discussed for the future of our association and there were elections for several vacant positions. And of course what should not be left out of an Agora, are fantastic parties with fellow AEGEE members from all over Europe!

Autumn Agora Salerno was my third Agora. Because I still can’t get enough of AEGEE, even after my board year, I decided to apply for the Agora as a delegate once again. This means I represented AEGEE-Groningen, together with two of our lovely boardies: Arjan and Aegle.

Two weeks before the Agora, the preparations started. We had to dig into all the documents that were submitted. These documents contain all the proposals that have been made to change the statutes of AEGEE-Europe and the motivations and programs of all candidates for the vacant positions. These candidates were applying for the Network Commission, SUCT (Summer University Coordination Team) or the new Chair Team of the Agora. During these preparations we determined whether we were in favour or against proposals and candidates, looking at what would be in the best interest of AEGEE-Groningen. We presented our opinions to the Agora Input evening and attending members gave their input as well.

I personally arrived in Italy a few days before the start of the Agora and used this time to do some sightseeing in Rome and Napoli. On the evening before the start of the Agora I reunited with most of the other Groningers and some other AEGEEans that happened to be staying in the same hostel, and the next morning we took the bus to Salerno together.

Now, something very unusual happened the day before the Agora started. Due to technical difficulties the gym where we would be sleeping for the week was no longer available. Immense respect for the local organizers, because in less than 48 hours they managed to find a new accommodation for all 650 participants, and it was more luxurious than any Agora ever before. I’m talking bungalows, with REAL BEDS.

So after a few hours of chilling and being happy with our new accommodation, it was time to take the bus once more and leave for the opening ceremony. Everyone was dressed for the occasion, except for me because I forgot to bring half of my suit. During the ceremony we enjoyed some performances by the members of AEGEE-Salerno and an amazing local band. Speeches were given by the organizers, the president of AEGEE-Europe and even old Salerno members that were involved with the Agora in Salerno 30 years ago.

After the opening ceremony we headed straight to the first party of the event. The rest of the night is history.

Every Agora is notorious for waking the participants up really early in the morning. This was made worse this time around by the one downside of our fabulous accommodation; it was a 40 minute drive to the plenaries. This meant that delegates had to wake up at 6 in the morning in order to leave and be on time for breakfast and the morning plenary.

Now the second day of the Agora was the first real day with content. During the Opening Plenary several presentations were given. The Chair team and the President of AEGEE-Europe welcomed us to the Agora and then it was time for an amazing tradition, the so called  “Roll Call”. One by one, every antenna is called out and has to show that they are present. Now, this tradition once started with all the locals simply shouting present, but over the years the roll call has become more and more elaborate. With locals singing songs from their city or putting on entire Lion King performances. For Groningen, there is of course only one thing we can do during such a thing: Singing the Noorderplantsoen as loud as we possibly can.

After the opening ceremony, there were parallel slots of prytania. These are the smaller meetings where usually proposals and activity reports are discussed. As delegates we always have to split up, in order to be able to ask questions at every prytanium. For visitors, there were some interesting workshops to attend. After lunch, there was another parallel slot of prytania. I went to a prytanium where we talked about optimizing the term of the Network Commission. Afterwards I went to another prytanium about the new Strategic plan 2020-2023, which was very interesting for me because I helped write it during the SPM (Strategic Planning Meeting) in Cologne last June. It was very nice to see some of the things I worked on being implemented in the final version of the Strategic Plan.

After two slots of prytania it was already time for the evening plenary, and this time a lot of candidates gave their presentations. This happened for SUCT -which is a very important team for AEGEE- the Chair Team for the next two Agora’s, and the Mediation Commission. They also announced the best ranked Summer Universities of last summer. Congratulations to AEGEE-Bilbao for hitting the number one spot!

After the evening plenary it was time for dinner and another crazy party. Wanna know what happened? Well make sure to ask Kalle.

After another early wake-up it was time for the second morning plenary. More presentations of candidates and a presentation of Europe on Track 7. This is a very interesting project in which AEGEEans travel through Europe on Interrail tickets, to raise awareness for important topics within AEGEE and to create a platform for discussion among youth. Did you know they will be visiting Groningen later this year? It’s going to be epic!

After the plenary there were more parallel slots for prytania. I went to another one on the Strategic Plan and one about Interest Group visitors having speaking rights. The second one ended up being really short, so we had an hour left till the rest would finish their prytania. So when almost everyone left the room, me and some friends from Eindhoven, Zagreb  and Cologne climbed onto the stage and practised our Baby Shark skills, as we would be performing it as an energizer later.

During the evening plenary the results of the various prytania were discussed and applicants for the function of Network Commissioner gave their presentation. After the plenary all delegates had to stay in the room, for they would be voting on all the proposals and candidates. After the voting round we made our way over to dinner and the party once again.

This mornings’ plenary consisted of  presentations from several projects AEGEE works on. After that there was a Thematic Conference and the Agora Fair, where many locals sell their merch. There was one last parallel slot. Here Aegle and I went to the Network Status Update. The Network Director gave us an update on all the new locals that have been founded since the last Agora, and the antenna that unfortunately have to be downgraded or deleted.

After the singing there was a presentation by the main organizer of Agora Yerevan, and they signed their contract with AEGEE-Europe. Agora Moskva was also approved.  The location of Autumn Agora Moskva 2020 was already announced earlier during the event, but because some locals wanted more time to think about it, it wasn’t ratified until the closing plenary. At least it wasn’t as much of a hassle as in Bucharest.

Later that night it would have been time for the always legendary European Night. Unfortunately the accommodation cancelled and we weren’t allowed to have one. But you can’t tell AEGEEans to just not party on what is supposed to be European Night. AEGEE-Eindhoven told us to come to their bungalow to just have a party at their place, but apparently they told too many people what was going on, and suddenly all the delegates were having a party in front of their door.

Because the visitors and delegates accommodations were 8km apart it was a party with only half the Agora, but we still had a great time nonetheless. Some people even had more fun than others, and some people remember less than others. But you should ask Arend-Jan whether he liked his European Night, he has stories for days.

All good things come to an end. And so did the Agora. We headed back to Napoli, where most of us still stayed for one more night. On Monday I flew back home. I was really jealous of AEGEE-Eindhoven since, unlike me, they live right next to the Airport. But during my long train ride I was able to sleep off most of that jealousy.

The Agora is an amazing experience and I can really recommend joining one in the future. It was a fantastic week of meeting old friends and making new ones. If you are curious about how AEGEE-Groningen voted or who got elected, make sure to check out the European NewsFlash that our amazing European Affairs Director already sent to you by email.

See you at Agora Yerevan!

(Or probably at the weekly social)