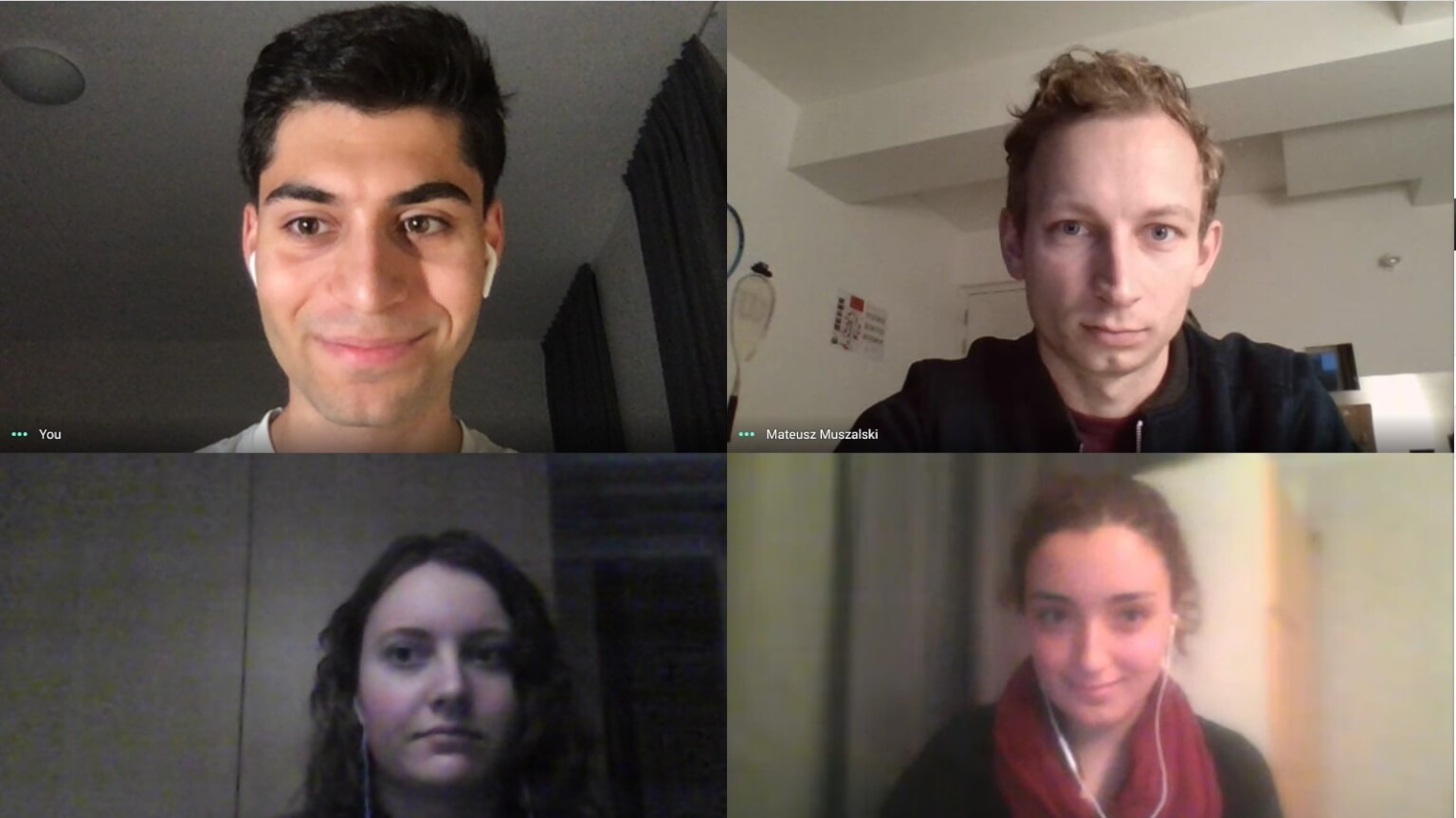 Hello there! This year’s EuropaCie consists of four highly-motivated members. Together, we organize workshops, lectures, debates, pub quizzes, and other events related to… You guessed it: Europe! Despite COVID-19, we are more determined than ever to come up with the best possible activities for all of our members to enjoy. Below, you will find a short introduction of us and, as a bonus, some spontaneous answers to fun questions.

Mary is a Persian-Dutch 22-year-old student trying to have some fun in this society. She is the secretary of EuropaCie. She loves to learn about history, art, and culture and would love to travel again. She likes to experience other cultures and see the extraordinary nature that this Earth has to offer. For now, she is stuck with Google and Instagram photos. Mary also enjoys classical music (goosebumps!) and used to play the violin. But due to problems, she quit and is now back to zero (secretly would love to begin again). You won’t see her socializing a lot but if she gets too comfortable you can’t stop her rambling :D.

In which country or city would you like to live in the future and why?

Which movie are you able to watch repeatedly and why do you like this movie?

Probably something with comedy because I don’t like to be sad when I watch movies. I watched “The Nice Guy” a couple of times and I don’t know why, but I really like that movie.

You just won a million Euros and you only have ten seconds to think about what to spend it on. What do you buy?

A ticket to travel around the world if that’s possible.

Merel was born in the Netherlands and is 20 years old. She’s currently the PR-responsible for the EuropaCie this year, but is also an active member in her study association Odiom. She has always been quite an active person who has done a lot of sports already (think of gymnastics, soccer, and volleyball), but never seems to stick to them…but she started riding horses since she was very young and that’s still going strong. She has her own horse, but he’s not old enough to be ridden just yet. She is a big fan of animals and will uncontrollably speak to them in a high, sweet-talking voice. Besides that, she loves to see new parts of the world, especially nature and architecture will catch her eye.

Would you rather be invisible or be able to fly and why?

When I was younger, I always imagined flying because that’s an easy way to travel.

What is your preferred way to spend your free time?

I like being outside, especially in the forest. I also really like horses, going on a trail ride, or simply watching movies. That’s the perfect way to spend my free time.

If you had to travel backward in time, to which period would you travel and why?

I would travel to the 18th century because many things were invented during this period. You had some specific rules back then, no cars, and many things were done by horse. I think it’s also fun to see how civilians lived.

Mateusz is a passionate finance student at the University of Groningen. He has been active in AEGEE for many years already, as he joined the association during his bachelor’s program while studying in Krakow. In AEGEE-Krakow he was a board member responsible for fundraising and later on he was chosen by Agora for the position of president of the Audit Commission of AEGEE-Europe. During his free time, he plays a lot of tennis and squash. He doesn’t like to run much, but somehow he managed to finish a marathon and last year’s Batavierenrace. On a daily basis, he is way less boring than this description suggests.

If you were to write a book about yourself, what would you name it and why?

I would like the book to have a creative and funny name and would maybe call it “The Story of Unfortunate Coincidences”. I believe that my life can be explained by a lot of unfortunate coincidences that were funny in the end and brought me to where I am now, but I am very happy with how everything turned out.

If you were an animal, which one would you be and why?

What is the strangest place you have slept at?

Probably a small and quite scary bench in a tiny village in Bavaria, Germany. I was hitchhiking with a friend of mine (who has a reputation as a very good hitchhiker) from the north of Poland to AEGEE House in Brussels. We also planned to visit our friend who lived in Bavaria, even though it was a bit out of our way. We obviously started too late and at some point, we got stuck about 100km from our destination. We decided to go through a forest to the village that seemed to have a railway station. The walk was quite scary. We reached the train station but it appeared that we were too late for the last train. The railway station was closed so we ended up sleeping on the outdoor benches and shaking from the cold. The next day we continued the trip to Brussels but we ended up in Eindhoven… If you need some tips on how to hitchhike you know where to find me 🙂

Lastly, we introduce Victor who is the mindful chairman of the EuropaCie. As a 22-year-old German, he is currently finishing his Bachelor’s degree in International Business. Besides, being a part of the EuropaCie but also organizing the Winter Open Tournament of his dearest tennis club, TC Veracket. As an enthusiastic traveler, Victor loves to visit other countries but is sadly restricted by the global pandemic right now. Therefore, he spends most of his time thinking about which countries he wants to visit in the future.

Which bad habit of other people drives you crazy?

Something that I really can’t stand is when I’m having a discussion and people keep interrupting me. I simply appreciate it when I can finish my argument before others introduce theirs. This way you can have a more seamless discussion whereas when you keep interrupting someone, it could get complicated. Therefore, I just prefer it when someone lets me finish my sentence.

What is the most useless talent you have?

I can finish off a Rubik’s Cube in under three minutes. There’s no value to this and that’s just something to do to show off.

What is your dream job and why?

My dream job was to become a pilot but this was never realistic because I’m color blind. I think it’s still an amazing job because you spend most of your time above the clouds where it’s always sunny. You also spend a lot of your time abroad meeting new people.

That’s it folks. See ya at the next AEGEE event.