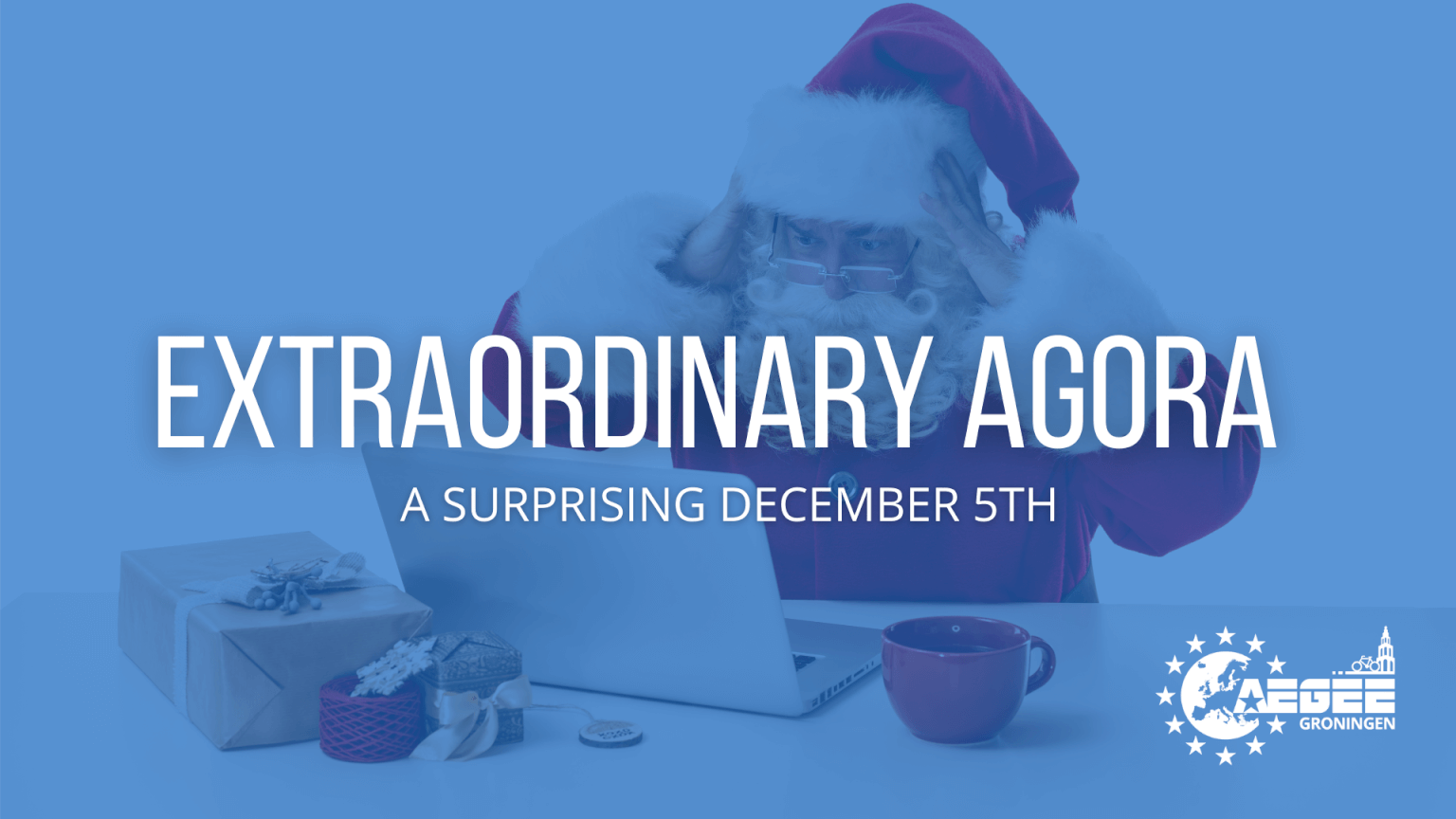 December 5th… a special day in the Netherlands, a moment to be shared with your family. It’s when in the morning you can find nice gifts from Sinterklaas and Piet in your shoe. That’s how for some of us this day has been in the past, but not in 2020. This year the day was filled with AEGEE spirit and spent with over a hundred members of our AEGEE family.

What has happened on this day is the Extraordinary Agora. A very rare event, since it has happened once or maybe twice in the past (opinions are divided). The day has started early, at 9:30 sharp with words of welcome from the Chair and President of AEGEE-Europe. Then it was time for one of the most exciting moments of an Agora… the ROLL CALL!!! Our enthusiastic delegates (Kirsten, Djené and Aleksandra), accompanied by Astrid <3 were ready to turn on their microphones and cameras, and bless the AEGEE family with the most amazing song ever “Het Gras van het Noorderplantsoen”. We have considered singing a Sinterklaas song, but we could not let go of the tradition and not express our enthusiasm about the beautiful grass in Groningen. Yet to our disappointment, no singing and no dancing was allowed, no rights to disable the mics and cameras were given. In that moment all we could do is send “AEGEE-Groningen: Present” in the EduDip chat, and so did the other locals. Following that, the Minutes of Spring Agora 2020 were ratified, and the first coffee break began, during which the delegates had to overcome their disappointment caused by the roll call.

The One and Only Parallel Slot

A special fact about this Agora, is that there were only two Prytania in a single Parallel Slot. The two financial documents were discussed simultaneously in separate Prytania. This was very efficient, and there was enough time left for a proper lunch break. During Agorae, lunch breaks can be easily shortened if the discussion goes on for longer than the time allocated to the Prytanium.

The Afternoon Plenary was mostly focused on reporting the results. The indicative votings of the Parallel Slot have been counted and presented, followed by a short question round. Afterwards the Financial Task Force reported back to the Agora about their activity and progress. The members of the Financial Task Force have put a lot of effort into their task and have achieved significant results, despite the short period of time. For more details read the recent European Newsflash.

Is it really over?

After a one-hour long coffee break, everyone resumed to the Agora to hear the final verdict. Seconds before the announcement of the final results, the plenary has been sabotaged by a special guest. It was Santa!!! The AEGEE Santa has shared words of encouragement for us and told everyone that they’re on the “nice” list. Surprising, but still good news. Later, the final results were presented and… both documents were accepted. That was fast, right? Then we have immediately moved on to the next item on the agenda “Commendations”. Before the closing speech by the president of AEGEE-Europe, some motions and statements were looked into. Some were delivered in a poem-like looking format, with edgy humor. Nevertheless, the evening plenary took about 22 minutes. That was shocking. The closing of the Agora at an earlier than originally planned time, sparked some joy and confusion, since we were not prepared for so much spare time. We were mentally prepared for this Agora to last until midnight.

The Extraordinary Agora was effective in solving the issues which have caused disagreement during the Autumn Agora. The European Bodies have put a lot of effort into making this event run smoothly, and locals sent their delegates even though it was not counted for in the Antenna Criteria. The next Agora will be in spring, and hopefully we will all be able to meet in Yerevan 🤞.