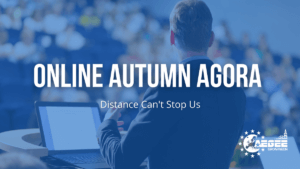 From 15th-18th October the second Online Agora in this year has taken place. Once again, all delegates and visitors could hear each other through Edudip and Discord. Isn’t it amazing how technology allows us to discuss important matters, while being scattered all over Europe? Although the delegates of other locals were far away, our delegates – Kirsten, Djené, and Aleksandra – spent the long Agora weekend together, accompanied by the rest of the board (shoutout to Astrid and Romy). We always had each other’s support and consultation at hand. With that lovely team spirit, we all got through our first Agora as delegate (or company).

Starting on Thursday evening, we have heard the first words of welcome from Monika – the Chairperson of the Agora, followed by more words of welcome from Diederik – President of AEGEE-Europe. After a reminder of the Agora procedures and how to use finger rules, it was time for the Roll Call, during which all the locals got their 30 seconds of spotlight (and speaking rights). That’s when the audiovisual fun has begun, since locals presented themselves by singing (and sometimes also by dancing to) a song which is most iconic for the local. To the extent that the internet connection has allowed, it was an exciting moment filled with echo of laughter (and of technical difficulties). On behalf of AEGEE-Groningen, the board has proudly sung “Het Gras van Het Noorderplantsoen” and shown the network both sides of our flag (yes, we first held it up backwards). The evening finished off with a couple of more Agenda items and an engaging social program by the Social Equity Working Group.

The first full day of fun started off with a Morning Plenary, during which the fulfillment of the Action Agenda ‘19-’20, and of the new and old Strategic Plan was presented. Right before we could walk to our kitchens for a coffee break, there was the Signing of Twin Antenna Contracts. It’s the moment when the bond between two locals is made official as they promise each other to travel together, support the other local, and join fun activities together.

We only had two parallel slots of Prytania that day. I tuned in for the Activity Plans and Reports of Working Groups, which were interesting and went it all rather smoothly. However, some of my fellow delegates were enjoying their Prytanium for much longer.

I’ll give you an outline of how a Prytanium goes and what determines how early/late it finishes. At the beginning of the session, the topic is presented by the representative (which can be either the author of a proposal or member of a European Body). Then the question line opens, and delegates can voice their concerns, doubts, or curiosity. Each question can get direct comments (or ii in online finger rules), this allows for a moderated exchange of ideas and a well-maintained debate. So, as you can see, it all depends on how many questions and direct comments are addressed.

The day started with fun and interactive workshops, provided by the AEGEE-Academy, Europe on Track Team and Political Activism Working Group. One of the workshops covered the topic of active citizenship and participation in society. During this workshop we looked at how to be involved in the society at local, regional, national and international level. After the first break, parallel Prytanium sessions started and different topics were covered in each slot. During one of them, the proposal about having SUCT as non-Agora elected body was discussed. AEGEE-Groningen was one of the co-proposers, and at the end of the Agora the proposal was accepted. In another parallel slot, the financial documents were discussed. It was not an easy discussion and resulted with a motion to have an extraordinary Agora. The exceptional 2020 could not continue without such a rare event. There has been only ONE extraordinary Agora in the history of AEGEE. Don’t miss the upcoming historical event on December 5th!!

In the afternoon, activity reports of Committees, Elected bodies, projects and interest groups were presented. All of them reported on their successes and shortcoming, and the impact of the COVID-19 situation. During the evening plenary, members presented their candidatures for various functions within the Elected Bodies. Some of the vacant positions have been successfully filled. Later in the evening, the partners of AEGEE-Europe were presented. Currently, some of the partners are Interrail, Council of Europe, and POLITICO’s EU Studies and Career Fair. Check out the rest at aegee.org J The day was finished off with a social program provided by the Climate Emergency Working Group. A movie about minimalism was streamed and followed by a discussion.

Sunday – Something Special on the Way 🚂

The last day of the Agora provided us with more workshops, progress meetings and a Prytanium about downgrading and upgrading Antennae.  During one of the workshops, AEGEEans shared inspiring stories from their time of being a member of AEGEE. Another workshop brought us closer to the partners of AEGEE-Europe. Through an interactive mind-map, the possibilities offered by the partners were explored. This amazing and informative workshop was given by two CD members.

At last there was the closing plenary, during which exciting announcements were made and important contracts were virtually signed. The contracts were of EMP Tartu 2021 and of Spring Agora Yerevan 2021. An announcement of the hosting local of the next Autumn Agora was made, and if the world-situation will allow it will be in Moscow!!!

Most importantly, the Europe on Track 8 Team presented the topic and routes for 2021!!! AEGEE-Groningen is part of the orange route and will host EoT at the end of April.

Finally, the Autumn Agora was closed with an end speech, given by Diederik (aka Clumsy Donut). He shared some words of encouragement and motivation for all members and thanked everyone for participating. It was an eventful online Agora, and it was great to see the AEGEE spirit, as well as other AEGEEans during Prytania and the social program. Hope to see you at the Extraordinary, and other future online or physical Agorae!!