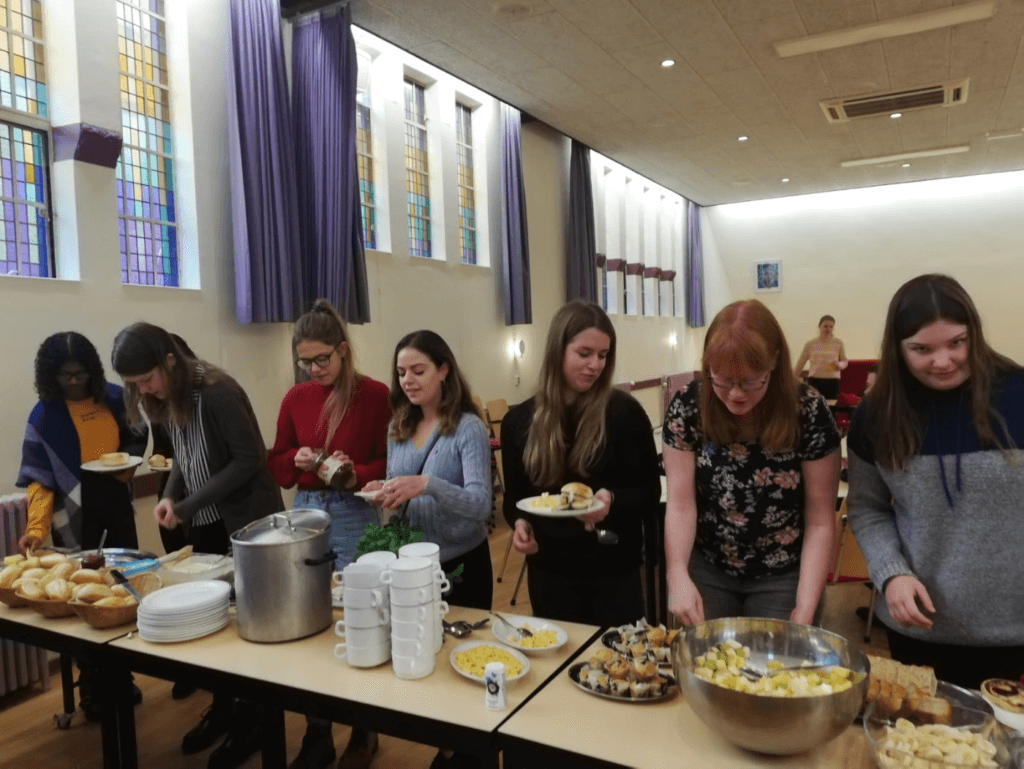 On Sinterklaas morning the Cooking Committee prepared a lovely hangover brunch for every AEGEE member who survived the social drink and was strong enough to climb out of bed. However, rumor has it, that it was definitely worth it! Lots of different kinds of food was served to cure everybody’s hangover, from sweet to savoury. The pancakes, waffles and blueberry muffins all perfectly fitted to the American theme.

A little fun fact about the waffles, although they tasted delicious, they were a pain in the ass to prepare. As the waffle batter and the waffle maker only agreed on one thing:  they definitely weren’t becoming friends. As heroic as Merlijn is he wouldn’t give up and spent big part of the morning on battling with the waffle maker just to make sure everyone could enjoy one.

Another fun fact is that the majority of the Cooking Committee also decided to visit the social drink the evening before. This made it hard to wake up at 8 o’clock in the morning to start the preparations. One person of the committee actually overslept and really had to hurry that morning. Another person needed a small break to be able to get herself together, before continuing preparing the so called perfect start smoothie. So, it could be said that the hangover brunch was actually prepared while all having a hungover. Luckily, it did not influence the enthusiasm of the committee and therefore the quality of the food.

As the food entered everyone’s bellies the hangry moods and hungover feelings disappeared. The perfect moment to start reviewing the social drink, where most of us probably drank more than they initially planned, stayed longer than they promised themselves and danced a little too enthusiastic to the traditionally really bad music played in the Brouwerij.

Everybody walked out with a stuffed belly and a cured hangover. This first activity from the Cooking Committee was successful and is absolutely promising for the next one! So make sure you start the new year good and join us at the New Year’s Dinner!