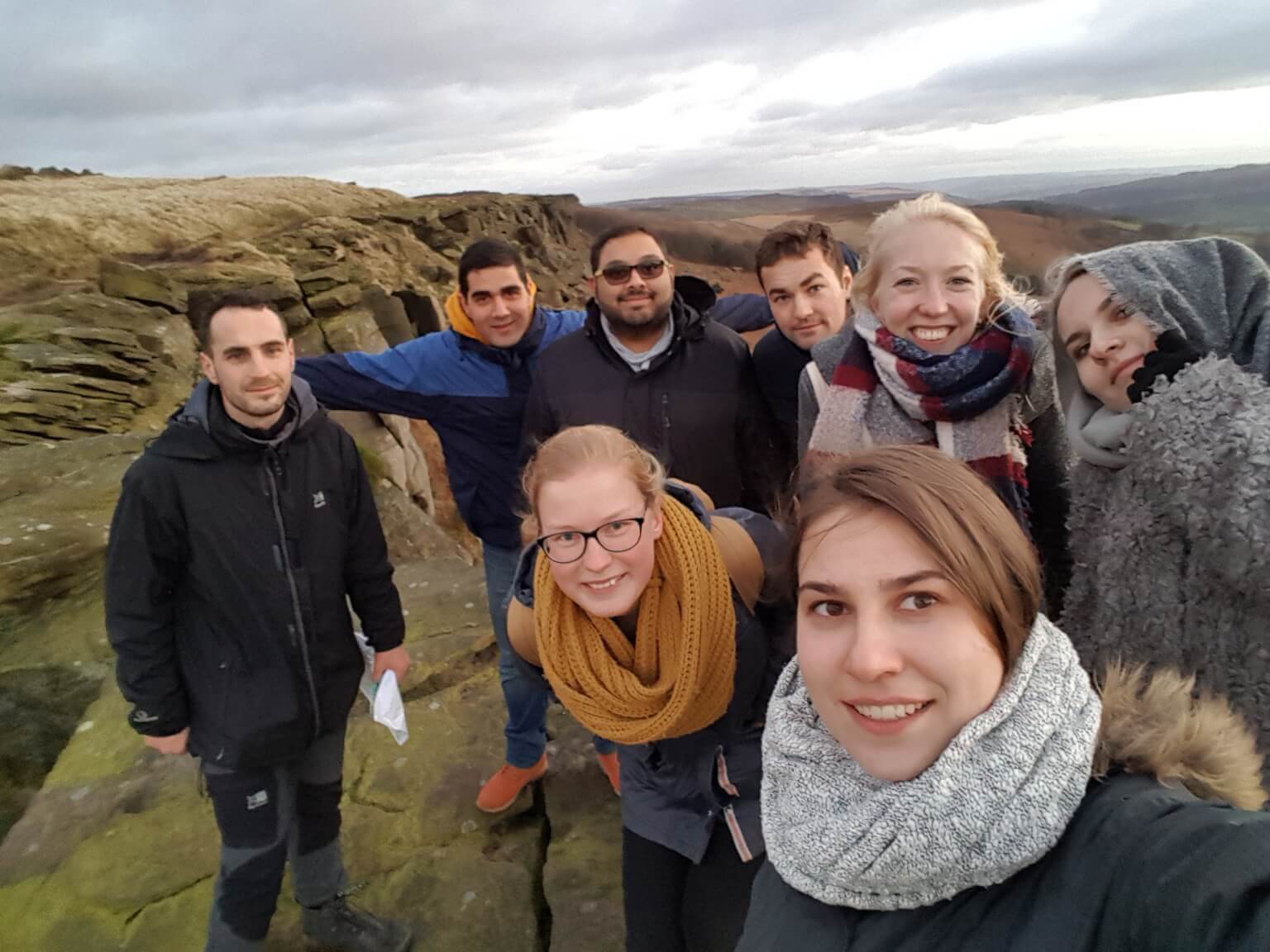 Last week I attended the conference ‘Brexit – What Next?’ in the UK. The conference, which took place from the 29th of November till the 4th of December, was held in Sheffield and in Manchester. The organizers of the event came from the three locals in the UK: AEGEE-Manchester, AEGEE-Sheffield, and AEGEE-London. Most of the organizers, however, were not originally from the UK. They were from Germany, Spain, Ukraine, Italy, and Belgium (among others). In the end only three out of eleven were from the UK. This didn’t make the discussions we had any less interesting. For the European organizers, the consequences of the Brexit would life-changing, as they all have been living in the UK as European citizens and once the Brexit happens this won’t be possible anymore. We were fourteen participants from different European countries including the Netherlands, Germany, France, Spain, and Estonia, but Turkey and Azerbaijan were also represented.

It all started Wednesday morning in Manchester. I arrived in Manchester airport and took the train to Sheffield right away. Oksana (originally from Ukraine and organizer from AEGEE-Sheffield) told me the group would be waiting for me at the Students’ Union building of the University of Sheffield. We would go into the Peak District area, which is a beautiful national park outside of Sheffield (Sheffield is partly located in the national park). On arrival, when I got out of the train station in Sheffield, the handle of my suitcase broke and I had to carry my suitcase into the tram and up the hill to the university building. When I arrived there, a student from Sheffield helped me to find the way, since, as if things couldn’t get any worse, my phone died and I couldn’t reach Oksana or look up where we exactly had to meet. Together with the girl I asked the janitor where the meeting point for the event was, but he told me he had no idea there was something going on and that two other guys also already asked him. Since I had no idea where to go I just stayed there and hoped Oksana would come and find me. I sat there for 45 minutes, the girl had already left. Then Oksana showed up, all stressed out because she thought I had gotten lost. Everybody was already there and with me the event could start!

On Wednesday, we went into the Peak District for a hike. It was a walk from Sheffield to another village through the hills. It was beautiful, but also very cold and it even started snowing on the top of the hill. We had a drink in a bar in the other village after which we went back to Sheffield. We had dinner at the Students’ Union. Students’ Union is basically the building where all the students eat lunch, do sports and chill, there is a cinema, and there are places to study. By ‘Students’ Union’ people also refer to the overall student association. Instead of many student and study associations (like we have in the Netherlands), in England there is one overarching organization that organizes everything for students. This also includes help services for students with problems and the organizing of parties for all students. On Wednesday evening, we bought drinks and spent the evening playing drinking games at our accommodation, which was inside a community centre in a neighbourhood near the centre. Not all participants and organizers were there yet, because they were going to join in Manchester. So, we were a small group of around eleven people.

In Sheffield, we spent most of our time at the Students’ Union building. We did a Quest in the building and had to ask people if they voted leave during the referendum and why, and if they had ever been on Erasmus. This was surprisingly hard as all students voted to remain and almost no students had been on Erasmus. We also had two workshops on Thursday afternoon by two students of the University of Sheffield. One of them was a famous British girl called ‘EU supergirl’ or ‘Alba White Wolf’ (her real name is Madeleina Kay). She took a break from her studies to actively campaign for the UK to stay in the EU, despite the outcome of the referendum. She became famous when she entered the European Parliament during Brexit negotiations wearing a superman (basically supergirl) outfit with the stars of the European Union around the superman sign. Nowadays she writes cartoon books on Brexit and the EU and one of her latest campaigns is called letters to Europe, in which she asks British citizens to write to ‘A European Friend’ on a postcard. She will give these letters to members of the European Parliament/European Commission. The other workshop was by a student teaching assistant who had a lot of knowledge on the structure of the EU and explained to us what the main arguments of the leave voters were and why they were not valid. Furthermore, we did a city tour in Sheffield, we went to a museum which was dedicated to the history of Sheffield, and we did a pub-crawl on Thursday evening.

On Friday, we left for Manchester by bus. Once we arrived in Manchester we started a city tour and all the other participants and organizers joined here! After the city tour, we went to our accommodation to have dinner and prepare for European Night. Our accommodation in Manchester was in an Army Reserve Centre. We slept on stretchers which was not always that comfortable, but the place was perfect since we had a sleeping place for participants and one for the organizers, we had two kitchens, nice showers and a separate dining room and we could make as much noise as we wanted. The European Night was great especially because England was overrepresented and usually England is not represented at all at European Nights. 😀

On Saturday, we went to the University of Manchester where we had a room in the Alan Turing’s building (think of the guy from the film The Imitation Game, btw great film I would recommend it to everybody). Alan Turing worked at the University of Manchester before the Second World War. We started off with a presentation by two board members of the Students’ Union of the University of Manchester after which we had a discussion with them about what students do and can do to stop Brexit or get the best deal out of it. For the board members, the best deal for students was for the UK to stay within the single market of the European Union. After eating lunch, we had a workshop by one of the main organizers; Bryn French, who made us come up with arguments for a debate that should look like the House of Commons (parliament of the UK, comparable with the Tweede Kamer in the Netherlands). This was a lot of fun! In the afternoon, we left to the city centre to join Madeleina Kay (EU supergirl) in her letters to Europe campaign and wrote some letters ourselves (we were filmed by BBC!). Afterwards we went into the Christmas market in the centre of Manchester which was overcrowded on a Saturday late afternoon. You could barely move between the stands that were serving glühwein, bratwurst and PEPERNOTEN! After the Christmas market, we went back to the university to hear Liberal Democrat politician John Leech speak about his opinion on Brexit. He was a Member of Parliament for 10 years (2005-2015) for the district of Manchester. The Liberal Democrats are the only party in the UK openly and strongly against Brexit. In his opinion Brexit will happen, but the UK will come back to the EU within his lifetime because of the economic disaster that Brexit will cause to the UK. He was an amazing speaker with very interesting insights. His speech was by far, for me, the most interesting of the whole conference! In the evening, we had dinner at the accommodation (in Manchester the organizers always cooked for us). Afterwards we spent the night clubbing in the centre of Manchester. It was a great night! 😀

On Sunday, we started with workshops at the university again. After a very extensive morning of waking up, we finally got to uni at 11. After many nights without sleeping we deserved a more relaxing morning. Best joke of the morning: While we were having breakfast our main organizer, Bryn, told us that we would be having breakfast after the first workshop. Everybody was confused since we were having breakfast at that time. Somebody corrected him and said: ‘‘No, we will have lunch then’’. After which it became ‘Breakfast – What next? … Lunch!’ Francesco, our Italian organizer from Sheffield kept saying Breakfast instead of Brexit while talking about Brexit, so this was very funny.  We had a workshop from two of our participants. Juuso (from Finland but studying in Edinburgh) is a member of the Young European Federalists and gave a workshop about campaigning. Maria (from the Netherlands) is a member of the Netcom of AEGEE-Europe and she did a workshop on Advocacy of AEGEE. We ended the day with a closing ceremony in which we wrote nice things about each other, on each other’s back. Sunday evening part of the organizers went back home again. With the rest of the group we went to the student campus and had a drink at a bar in the campus. Afterwards we went to a bar where we had free drinks till the end. We spent the rest of the night playing games at the accommodation. The best game of the night was when we were divided into two teams and we had to write down a story for the other team that they had to act out to each other. The goal of the game was to let the last person tell the story that the first person showed, but the story goes past several people of one team and you cannot talk while explaining the story. This resulted in hilarious moments. The videos, made that night, prove the fun.

On Monday morning, most people left. Me and Sonja, the girl from Estonia, had a flight later in the evening so we spent the day walking around Sheffield and chilling in the airport. We were the last ones to leave. One crazy thing happened in the plane back from Manchester to Amsterdam; I sat next to one of my future teachers. He saw the book I was reading and asked me if I studied IRIO. We started talking and it turns out he teaches courses of my study and is going to be my Placement supervisor. This made my day hahaha!

This event made me realise that even though the referendum has happened, the people of the UK are by far not satisfied and most worrying is that they are also very divided on what the future of the UK should be. I met so many great people and learned a lot about British politics. This was an amazing AEGEE event!

As the British would say;

Cheers and see ya later 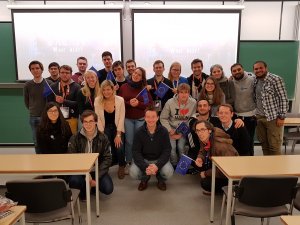 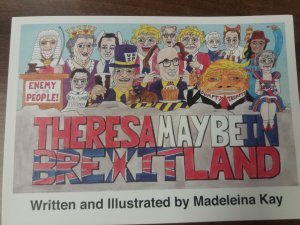 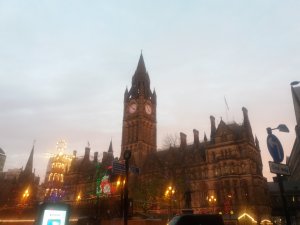